GreyscalegorillaProductsGorillaCamInterview: Ash Thorp on Creating a Cyberpunk Western for Nike

Interview: Ash Thorp on Creating a Cyberpunk Western for Nike

Designer and Art Director Ash Thorp creates a sci-fi spaghetti western in this Nike VaporMax spot. See how he used GorillaCam to bring the project to life.

Blink and you might miss the stellar work of designer and all-around creative mind, Ash Thorp. If you aren’t familiar with Thorp’s work, he created many of the stunning posters, concept art, VFX, and titles used in films like Blade Runner 2049, Ghost in the Shell, and several Marvel blockbusters.

You can take a closer look at his Nike work in this video Thorp shared on Twitter.

We wanted to learn more about how this collaboration came about, so we reached out to Ash Thorp. Here’s what we found out in our interview:

Chad Ashley: For those not familiar with your work, could you give us a brief history of who you are, and what you do?

Ash Thorp: My name is Ash Thorp, and I am a creative, I’m a director, artist, illustrator. I’ve been working in the feature film industry and AAA games industry for almost 8 years now.

I primarily work on feature films, that’s my client work. I’m slowly migrating all my efforts to direct my own feature film.

CA: How long have you been using Cinema 4D?

AT: I’ve been working in Cinema 4D maybe about 7 years now. It’s kinda crazy, seeing I still kinda suck at it. [laughs]

CA: I’m curious about that. You’re work is amazing, and you do a lot of original concept work. How much of that is done in 3D versus sketching.

AT: It all varies and depends. I will sketch my thoughts on paper. If it’s a motion piece, I’ll do a still, or series of stills to sell the idea. From there, it’s full on pipeline mode to do the animation and all that fun stuff. 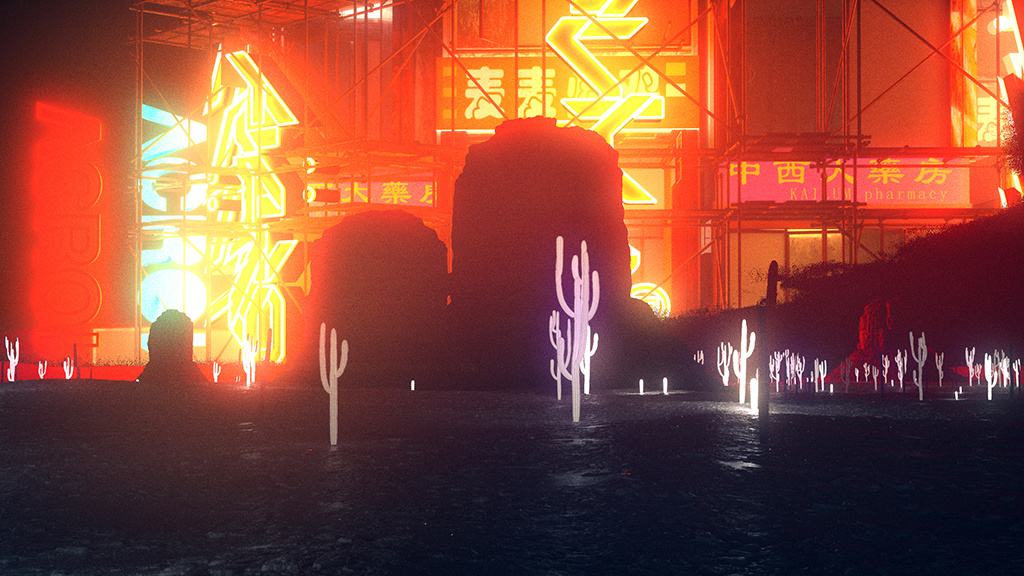 CA: I just watched your new Nike piece, and it is just fantastic. Can you tell me how that started?

AT: Yeah, it was a quick job. Very quick. Just a couple of weeks. I knew Errolson, who is the founder of ACRONYM clothing. He’s just an awesome guy, and I’ve had him on my podcast.

So, he was pitching a concept and idea to the team at Nike for the release of his new shoe collaboration, the VaporMax. He was like, “You know who could do this? Ash Thorp.”

They needed to make a world very quickly. They pitched the idea to me, to merge a spaghetti western and a cyberpunk world. Instantly I was like, “Wow, that’s really weird. That sounds good. Let’s do it!”

I was thinking, well, we’re really in a place in the realm of CGI that you can do anything you want. That’s really powerful for someone like me, who just wants to get these ideas out of my head as fast as possible.

I saw the vision for what it was, so I grabbed a bunch of assets off of turbosquid, modeled a bunch of stuff, and did some style frames. The Nike guys loved it, Errolson loved it, and then I was like – Ok. To the races.

I was basically rendering for an entire week with all my cards on fire. I think it was a total of three weeks, from nothing to the final.

I wasn’t alone. I had my buddy Toros Kose, and he took care a lot of the heavy lifting in After Effects while I was rendering and building out the worlds. We had a lot of fun passing stuff back and forth. 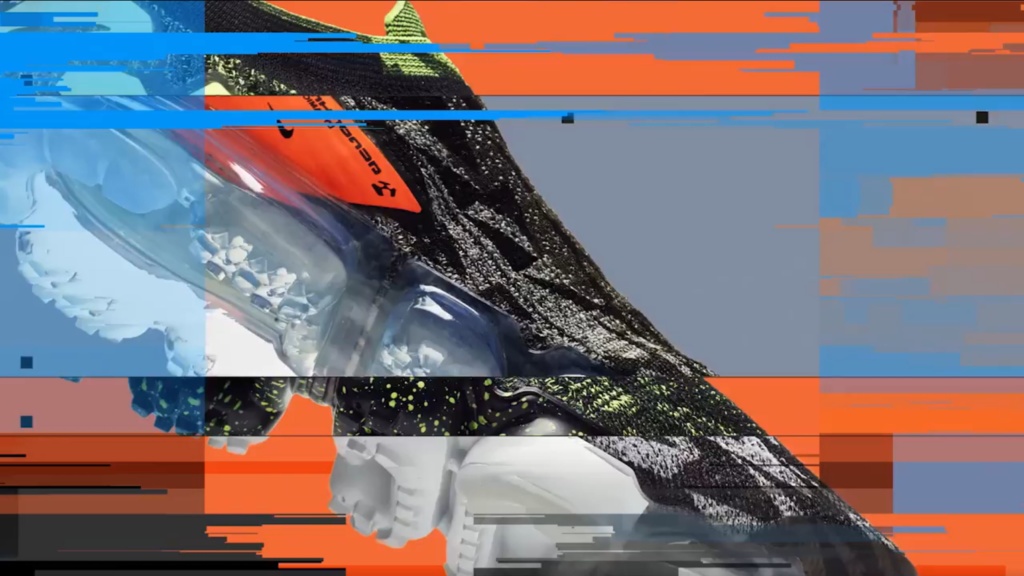 CA: So it was just the two of you?

AT: I think it’s the future. The future is in smaller teams of smart people working together, complementing strengths and weaknesses and making good stuff. In my mind that’s really where things are going.

I’m seeing the death of the bigger studio. I could be completely wrong, I just feel like that’s the way I’m moving.

CA: I don’t think you’re far off at all. I remember a while back, that you were mentioning you were starting a potential job that would be good for GorillaCam, which we were we still pretty early on in developing. I got you an early version of the plugin to play with. I had no idea you were going to actually use it on a job!

AT: You literally gave me the plugin the day I started animating. That’s how good it is!

CA: Wow, my timing is just that good.  [laughs]

AT: I took it, and watched the tutorial. I think that’s one thing that I will say is so important for software creators and app developers. Please give us an understanding of how this thing works. For people that are crazy busy like myself, and with an attention span of a nit-wit.

I watched the tutorial, and I went right into it. I was like, “Oh, this is what I’ve been wanting for forever now.”

This is the way I did it, which is probably against the way you intended – but I don’t care. I just kept hitting “I’m feeling lucky.” I made two cameras and said I’m feeling lucky, and I was like, yeah, that’s good. Alright, cool. Then I rendered it out.

I wanted it to feel really weird and handheld. Kind of like a drone that was super spazzy. So, I created the cameras in a point A point B, then patched everything together using the GorrilaCam.

I would change the scale to World Scale proper, and then I’d just keep hitting I’m Feeling Lucky. I had no time to really finesse things.

CA: That is exactly how I use it, just so you know. When we were designing it, I said to Chris Schmidt, I want a button that says I’m feeling lucky. I got used to the Google Play Music “I’m Feeling Lucky” button that would build playlists for me. I wanted that functionality in GorillaCam. Sometimes you could surprise yourself, you’re not really sure what you want. So I usually hit that or Randomize Seeds.

AT: Beautiful. Thank you for that. That’s how I work. I’m a weird hyper-child who pixel-fucks everything to death, but I also like randomness. So I enjoy the ability of having flaws. I like to be surprised when I make things.

When you’re at a computer, it’s such a linear experience. It’s very controlled. Oftentimes, it’s about putting imperfections into your work to let it breathe.

I think it works mighty fine for me, and I’m gonna use it like that till the end of time. [laughs]

I’m starting to do pre-viz for my films, and I started slapping the GorillaCam on there, just so it doesn’t feel so rigid. It just helps me do my job faster.

CA: I’ve always wanted this tool in Cinema, and I feel very fortunate to work with developers who can make this a reality. The most satisfaction I get from my job, is hearing from artists like you and hearing that they’re getting something out of it.

AT: I couldn’t be more thankful, honestly. You guys have an interest, you build something, it’s awesome, it’s very useful. It helps me just be an artsy-fartsy guy.

CA: What renderer did you guys use for this?

AT: [laughs] I know, I know! I’ve seen your new tutorials on Redshift, and it looks so promising and awesome. Especially to someone like me, who uses a lot of volumetric and lights and doesn’t like noise. But, I’ve been using Octane since I started doing GPU stuff.

CA: What about the comp pipeline, that was all After Effects?

AT: Yeah. I just like to render everything without any passes and send if off. I’m kindy risky like that. Then Toros and I will take all the renders, which I have 6 GPUS – 3 Nvidia Titan X‘s and 3 Nvidia GeForce 1080‘s. Some scenes are really heavy geo-wise, so it would be 8 or 9 GB of VRAM. So they’d take like 7-8 minutes a frame.

We originally cut it to a Justice track, added glitch and removing things and going bonkers on it up until it shipped. We were working on it up until the last minute.

You know, you hate it when you do it, but the only way to get that stuff out is to put that pressure. It’s unfortunate, but that’s just how it goes.

The people at Nike are very talented, and have great taste. I’m just lucky that they picked me to go along the ride with them, and they realize that they best way to do this stuff is work with a creative and stay out of their way.

They just let me be a bozo and get crazy. Plus I don’t think I’ve ever seen a cyber-western.

CA: That’s great. Thanks for sharing and talking with me.

AT: Thank you for what you’re doing! And thank the entire team at GSG. You’re making it easier to do what I want to do, which I appreciate. Thanks!

More about this project:

You should also check out Ash Thorp’s AWAKEN AKIRA passion project. The short tribute film also has hours of behind-the-scenes breakdowns in C4D and AE.