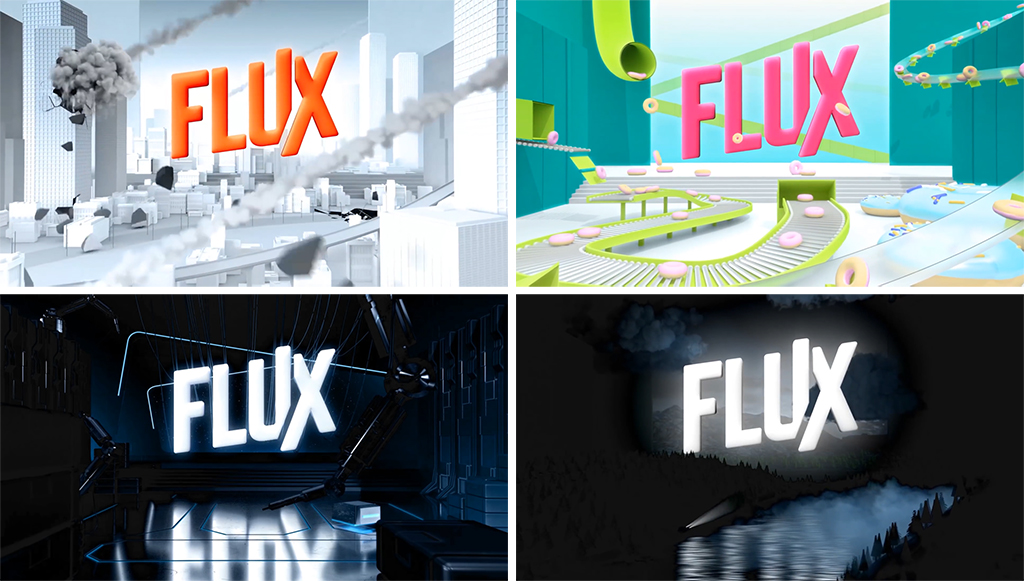 Special thanks to Cineversity for recording the presentation, and to Maxon for hosting these great speakers.

Part One: Action and Comedy Promos in Cinema 4D

In his comedy promo piece, Dan creates a scene controlled entirely via Cinema 4D’s dynamics. Watch him design a working conveyor belt using Motor and Hinge objects and the MoGraph Cloner. Then he’ll use the sculpting toolset to quickly add icing to donuts, and finally apply soft-body dynamics to the donuts with the help of the Mesh Deformer.

Let’s jump into part one.

Here’s a timestamped breakdown of the presentation courtesy of Cineversity.

In Dan’s second presentation, he’ll move onto a sci-fi promo, where he models interesting wall and floor designs with C4D’s Knife tools. He then models an articulated arm and shows you how to animate it with Inverse Kinematics (IK). He also creates hanging wires using Spline Dynamics.

For the thriller promo, Dan will create a procedural landscape by layering noises and gradients within a Displace Deformer. He’ll populate the landscape with trees using the MoGraph’s Cloner object. Then he’ll apply MoGraph Selections and the Hide Selected command to art-direct the location of the trees. He also uses the Spline Defomer to add a roadway, and animates a car along the road via the Align to Spline tag.

Dan concludes his presentation by talking about C4D’s Take System and After Effects integration, which are invaluable when creating multiple versions of similar promos.

Here’s a timestamped breakdown of the presentation courtesy of Cineversity.

“Ever since I was a little kid, I remember getting excited about seeing the production logos at the beginning of movies or seeing the Stephen J. Cannell production card at the end of my favorite tv shows. I sometimes loved title sequences more often than the actual shows themselves. I never really knew why I loved them, but funny how life works out as now I’m lucky enough to work on them. I’ve been creating motion graphics for film and broadcast since the late 90s, dipping in and out of freelance and staff, holding every position from Runner to Creative Director. I try to be inspired by as many things as possible, the beautiful, the mundane and the ridiculous and, hopefully let that all come out in my work. Sometimes a job just pays the bills but I like to think I’m one of the lucky ones who truly loves what they do.”