In fact, if you are an After Effects user, you’ve likely seen Jr.canest’s work everyday. He and Mitch Myers collaborated on the Adobe After Effects CC 2018 brand identity that you see when you startup AE.

The project was created in a combination of Illustrator, Photoshop, After Effects, and even some Cinema 4D.

“As Motion Designers and 3D artists, we use After Effects every day as an integral part of our workflow. The opportunity to develop the new AE identity was a perfect way to integrate Mitch’s knowledge of cinematic scene building in Cinema 4D, alongside with Jorge’s amazing look development skills in After Effects. With both of our strengths meshing well, we were able to develop a look that infuses the inner workings of After Effects into an organic and cinematic 3D world. It genuinely captures the relationship that our creative minds have with this technologically advanced production program we all know and love. Different worlds that are part of the same universe.”

Here is a quick behind-the-scenes look at that very project.

You can read much more and see more breakdowns of the Adobe ident on Behance.

For the team management tool Asana, Jorge worked on concept art, design, and animation along with a team at Giant Ant.

The team created a, “help launch their sexy new look with a gradienty swoopy motiony extravaganza.” Check out the extended Director’s Cut for the piece. (More on this project here.)

In a really fun piece for WIRED, the team at Giant Ant turned to Cinema 4D to create Play-Doh!

“We thought making a 2D info-graphic with play doh would be awesome, but… it wasn’t as cool. So we started testing with 3D and we were finally getting somewhere, we managed to fake play-doh inside C4D and had a lot of fun doing it.”

Jorge worked on multiple aspects of the project, starting with art direction and design.

He then worked on both the 2D and 3D animated elements throughout the piece. 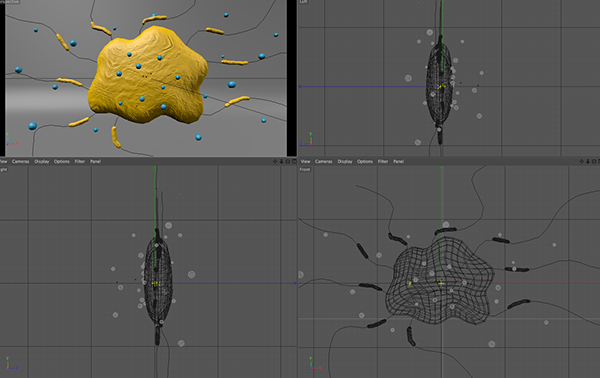 More about the Play-Doh project here.

We are thrilled to announce that you can now learn motion design from Jr.canest himself in the Motion Design 101 training series from Learn Squared.

Who better to learn from, than a person who has made a career out of concepts, designs, and animations for major brands? Plus, you can definitely learn something about After Effects from someone whose name is literally on the product.

Jorge not only teaches AE, but will go through the entire creative process using the Adobe Creative Cloud. You’ll concept and design in Illustrator and Photoshop, fine-tune audio in Audition, work in Animate, and then dive into After Effects.

The course is packed with nearly 100 videos adding up to over 35 hours or training, assignments, and bonus content.

This training series is available now on Greyscalegorilla.

You can see more from Jr.canest here: