Here Marieke Blaauw, Job Roggeveen and Joris Oprins—who met while studying product design at the Design Academy Eindhoven in the Netherlands—explain their latest project as well as their love of black comedy and really, really short stories

Meleah Maynard: Why did you want to make A Double Life?

Marieke Blaauw: We were fascinated by two themes when we wrote this film. First, there were a lot of TV shows on Dutch television that focused on gender, with great titles like Love Me Gender or Genderbender. And that was around the same time of the controversy about gender-neutral toilets. It was clear there was a lot of confusion about gender, about what is manly and what is feminine and about the shortcomings of the labels male and female.

We were also reading a lot about the shifting balance between men and women in the workspace, and how sometimes men feel threatened and overcompensate by growing large beards and picking lumberjacking as a hobby. While women are unsure whether they should start wearing suits to become one of the boys. That overall confusion about gender conformity, and how that confusion can be threatening to men, led to the concept of the film. 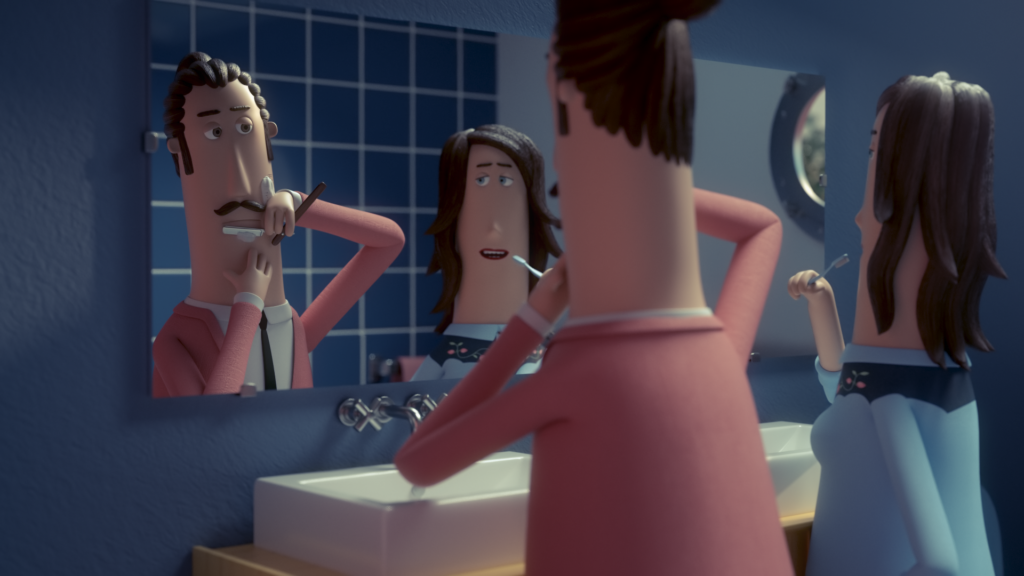 At first, the husband sees his wife’s desire to be a man as a joke.

MM: How did you balance making this film with your studio’s other projects?

Job Roggeveen: The three of us worked on this film for four months in between other projects. We always work on multiple projects at the same time, and we start every project with the three of us coming up with a concept and working out the story. After that, we divide the work. Joris and Marieke work on the animation and I work on the art direction and the soundtrack.

With this project, the hardest part was fitting a complicated story into only two minutes. We were constantly scraping away bits and pieces until only the essence of every scene was left. That was fun to do, and at the end, we got a film that is really on point.

The other challenge was figuring out how to make sure the audience didn’t get confused in the second half of the film when the two characters are identical. We decided to give them both a different colored suit. But the best way to show who was who, was through their actions, so we made sure their actions and reactions were as clear as they could possibly be. 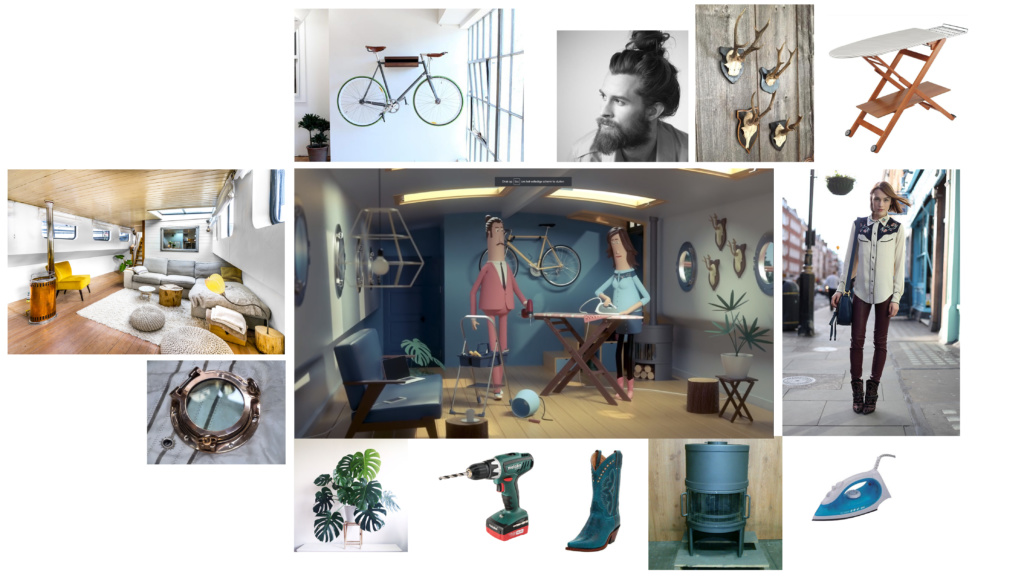 Job, Joris and Marieke created a mood board when designing characters and props. As they worked, they tried to play around with what is masculine and feminine.

MM: Can you briefly describe your workflow and the software you use?

Marieke Blaauw: Our main tool for designing, modeling, and animation is Cinema 4D. For lighting and rendering we use the Octane plugin. We have a small render farm of two computers, each has two GeForce 980 Ti graphics cards so our render times are really fast. 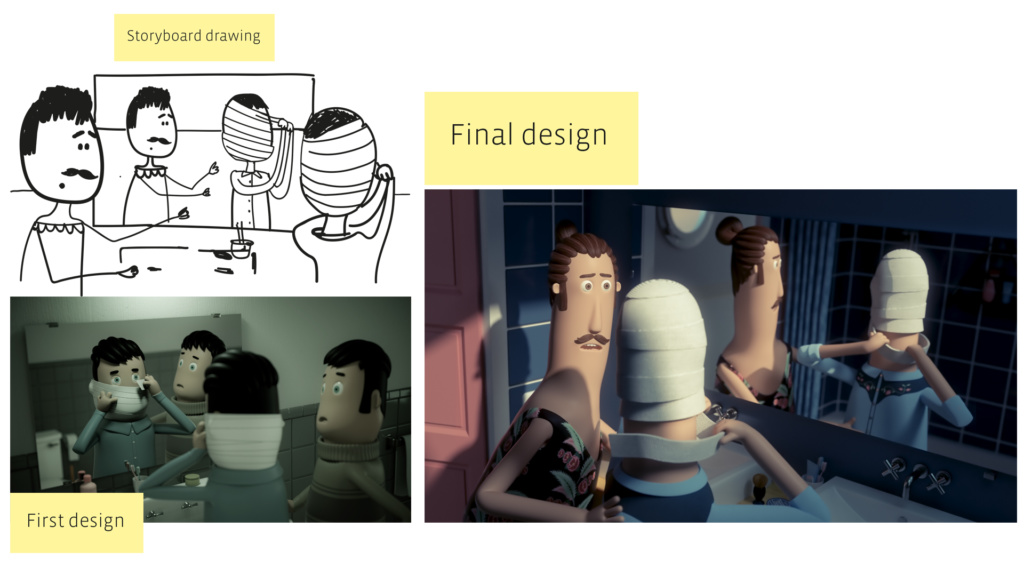 After pitching their idea with a storyboard (top left), Job, Joris and Marieke did their first design before evolving to the final look.

To get rid of the small grain in the render, we use an After Effects plugin called Neat Video, and we use Lumetri for some color grading. As a finishing touch, we sometimes use Magic Bullet Looks to add some diffusion or flare.

Job does our sound design and music in Cubase and, most of the time, he works on the music during the animation process so the music can influence the story and timing from an early stage. 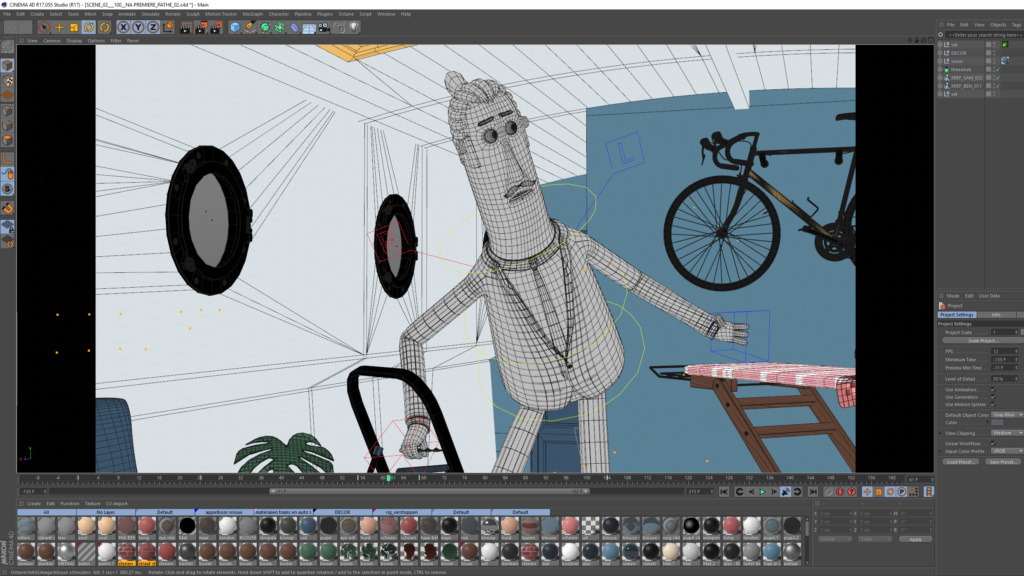 Marieke Blaauw and Joris Oprins do the bulk of their modeling and animation work in Cinema 4D and use Octane for rendering.

MM: Your characters are always unique looking. How do you design their faces?

Joris Oprins: We always optimize our characters the same way. We make a basic version of the face, and then optimize all the features by trying out different sizes and placing. ‘

Normally our characters don’t have noses because we think they look better without them, more stylized. For this film, we wanted to improve the range of emotions the characters could convey. We learned a lot from a book by Paul Ekman, where he shows what every part of the face does in each emotion. 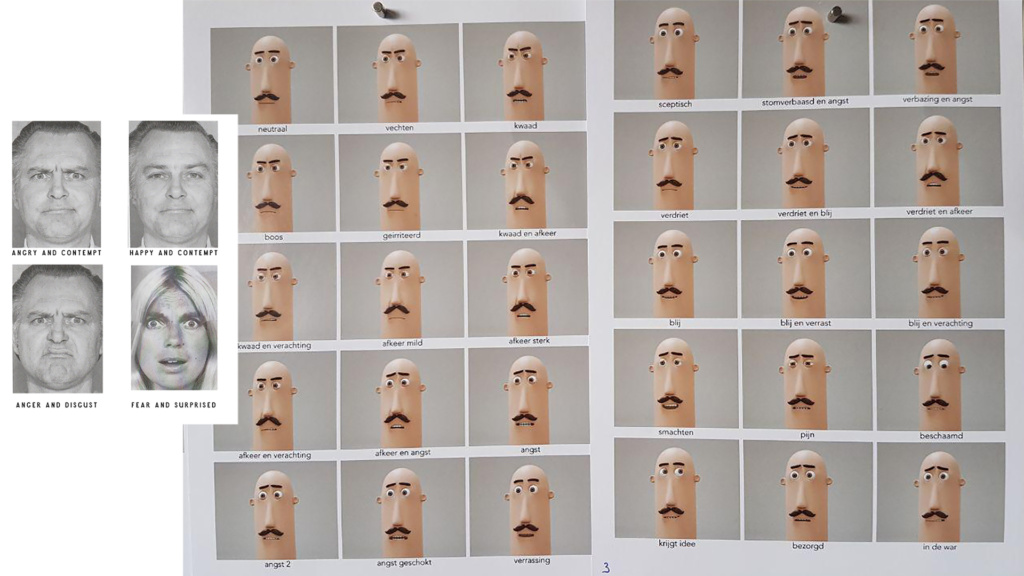 Photos from a book by psychologist Paul Ekman were used as inspiration for the studio’s “bible” for facial animations.

For example, disgust, an emotion that is very important in our story, a nose is key because you raise your nose a bit. So that’s why the characters in A Double Life have noses.

MM: The film doesn’t show who lives or dies at the end, why?

Joris Oprins: Our main goal was to entertain an audience with our absurd black humor. But we also like the way the open ending starts a discussion. It’s impossible to figure out who won at the end.

Both characters deserve to die, or to live. There is no right answer. It’s up to you to decide, and each person will have his or her own idea about who lived. 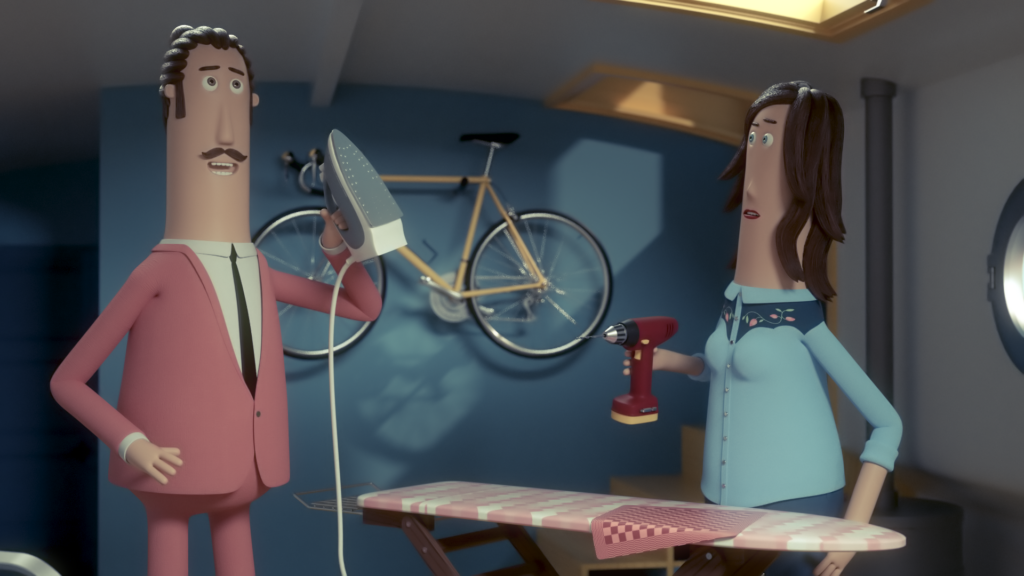 While pondering what is considered masculine or feminine, the trio decided that “only a very manly man could pull off a pink suit and a bun,” Oprins says.

We think it is really interesting the way your preference about who won says something about who you are and your opinion about gender conformity. Hopefully, this leads to interesting conversations.

For us, it was also interesting to be confronted with our own ideas about gender roles while making this film. We think we are all very much emancipated. But when we were working on a scene in which a shirt had to be ironed, Marieke had to show us how to use the iron properly.

And, oddly enough, Job and I weren’t of much use for the shaving scene. We had no idea how to shave with an open knife, so Marieke looked it up on YouTube and now she knows all about it. 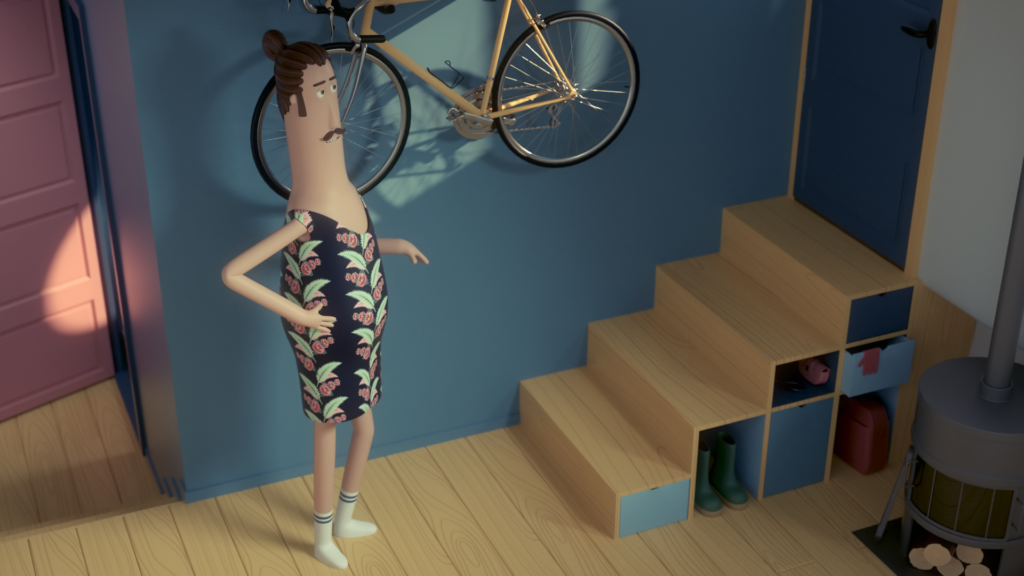 Still chuckling about his wife’s unimaginable desire to be a man, the husband puts on one of her dresses and struts around the house.

MM: What do you like about making very, very short films?

Marieke Blaauw: We really like the challenge of telling a story in a very compact way. It forces us to be really on point—each frame counts. The speed suits our concepts really well and makes our films feel like a roller-coaster.

We made this film, and A Single Life, as part of the Ultrakort project, which requires films to be three minutes max. It’s an initiative of the Dutch Film Fund, Fund 21 and Pathe Cinemas and, each year, four very short films are made to be screened in front of blockbusters. This year our film will play before The Girl in the Spider’s Web. 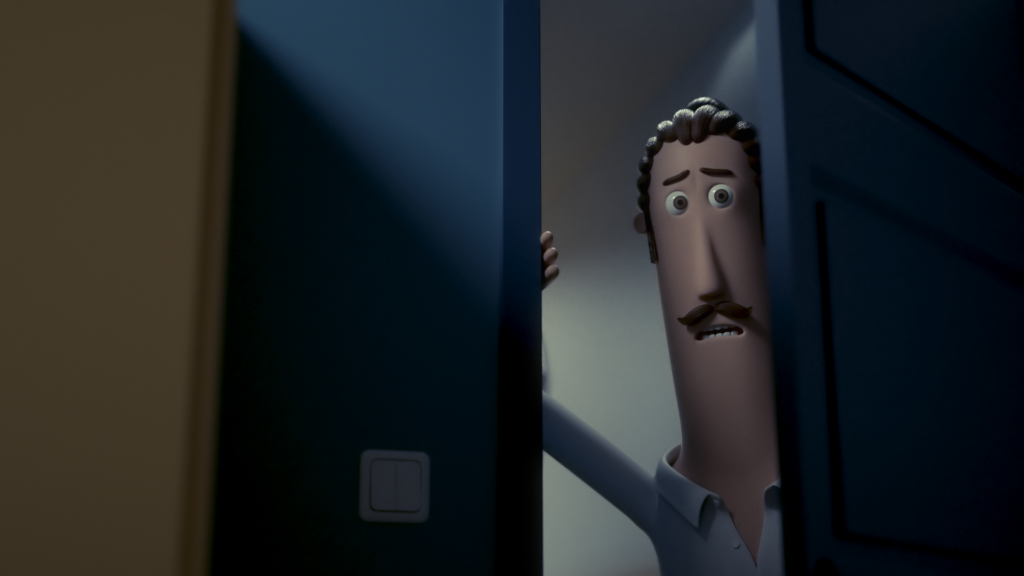 As it turns out, the husband was leading a double life as well, just in a different way.

MM: Would you say you are all comfortable with making audiences uncomfortable?

Joris Oprins: We find a lot of pleasure in inventing uncomfortable scenes and animating them in anticipation of the audience’s response. When we show our short films, we often get the chance to see the audience’s faces and we just love the moment when they furrow their brows and twist their mouths over whether they should laugh or be disturbed. To know people’s brains are trying to work out what to make of it, is really a priceless moment. We make films that are funny. But these awkward moments are meant to make people think more about the subject. A Double Life has a darker tone than most of our films. We felt it suited the concept well, and we wanted to try something new, including the film’s sex scene. That’s new in our oeuvre, and the film is rated 12+, which is quite a new thing for us.