GreyscalegorillaDesign‘Vaportecture’ is the Often Hilarious Insanity of Arch Viz Renders 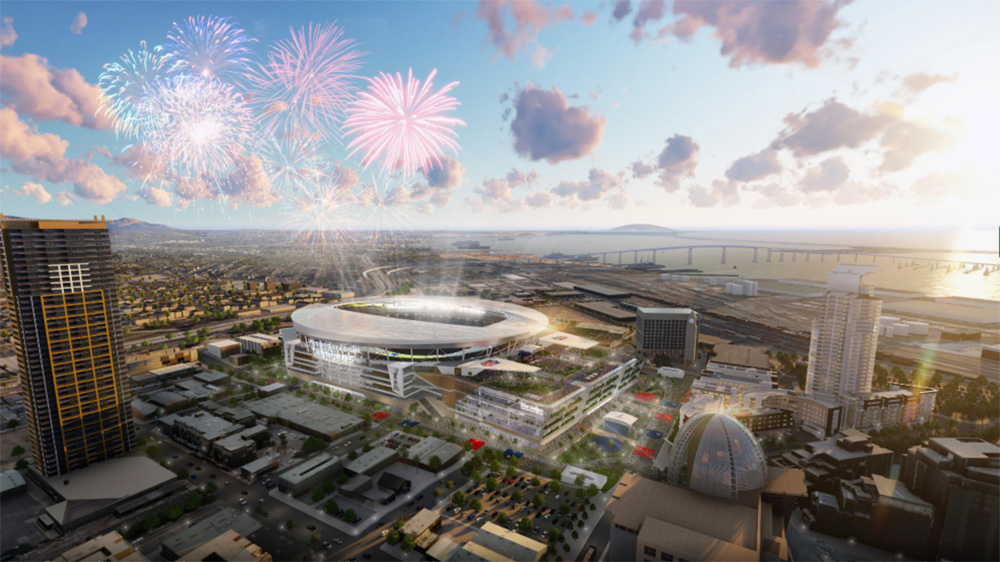 These 3D renders are not supposed to be photoreal, but are really more akin to propaganda in the fact that the point is to solicit a response from the general public. It’s a process I’m all to familiar with, living in a city that is constantly building lavish new stadiums and home of one of the largest architectural design firms.

In the past, I’ve had concept art and renders come across my desk for new stadiums, arenas, and facilities while working and attending university. (Our office had to figure out how to network all the various booths, screens, video production suites, and even luxury suites.) 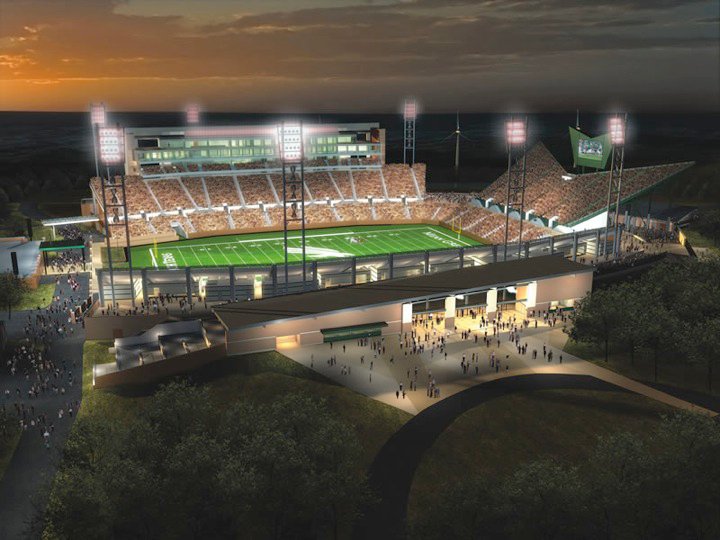 The closest thing to an ocean background that Denton has is a dirty lake 15 miles away. Render via University of North Texas/HKS.

It’s an overall incredibly complex and large scale project, but it never gets off the ground without support. The best way to build support is to present these over-the-top renders of what could be.

Vaportecture is a strange artform that combines architecture, marketing, futurism, and a whimsical-bordering-on-psychedelic approach to portraying a fever dream for public consumption. But it is an artform.

As for the always anticipated release of stadium renders, deMause goes on to say,

The rendering drop has become a time-honored tradition in the sports development world, the moment when the local rich guy’s dream building goes from eye-popping dollar figure to eye-popping dollar figure with an image gallery attached to it. The images may be overly fanciful, may bear little relation to physical reality, and may never be built like the illustrators and CAD jockeys intended if they are ever built at all, but they are an important first step on the road to shiny new toys.

The Basic Elements of Stadium Renders 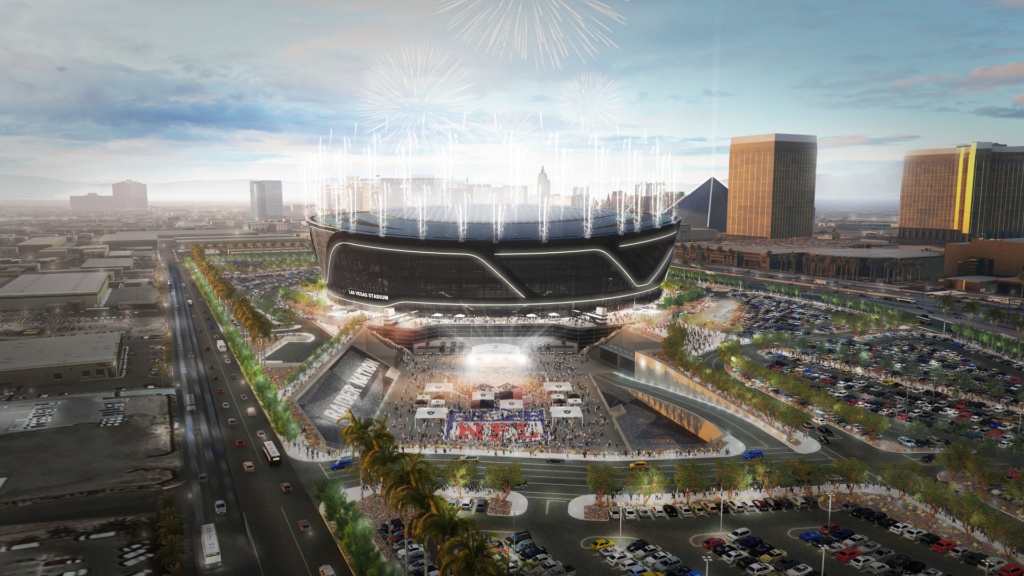 Now there are a few things you’ll always see in stadium renders. Beautiful skies, local landmarks, and an entourage of people. If you ever see vehicles, it’s only the perfect amount for the small parking lots.

I’m an Architectural Draftsman. I work, primarily, in AutoCAD (2D drafting) and Revit (3D modeling and rendering specifically for the architectural field). I also spend an inordinate amount of time churning out renderings for various projects, which means I have a very contentious relationship with Photoshop. 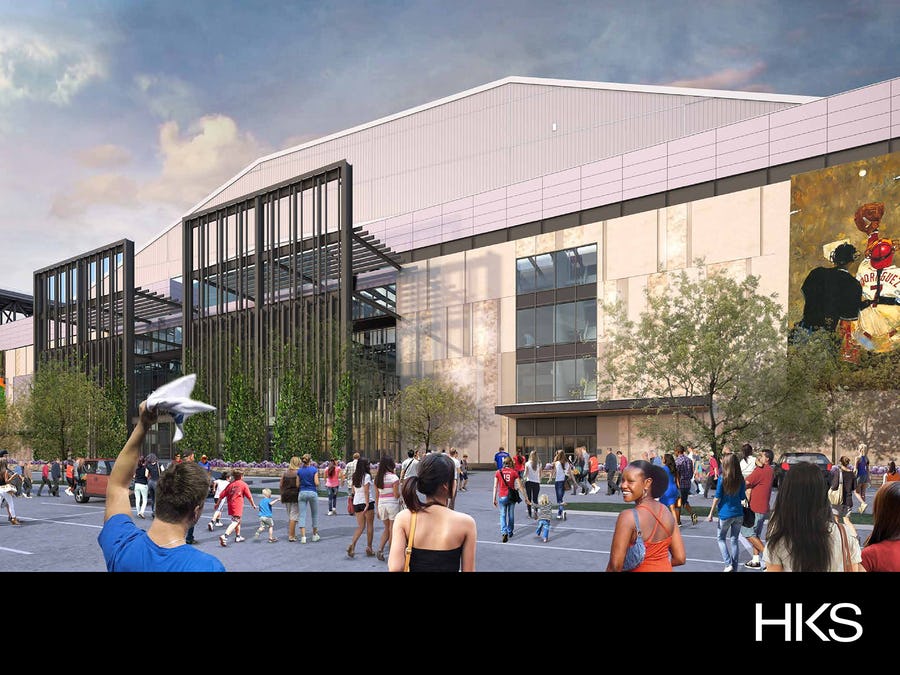 Ample close parking and plenty of room to walk. Render via Texas Rangers/HKS.

All of the critiques about the images shown above are all valid and, for the most part, the things being critiqued were done intentionally. It all boils down to two very simple ideas: 1) The people these are geared towards don’t know enough to spot the mistakes, problems, or the big old middle fingers to physics AND 2) Shock & Awe. 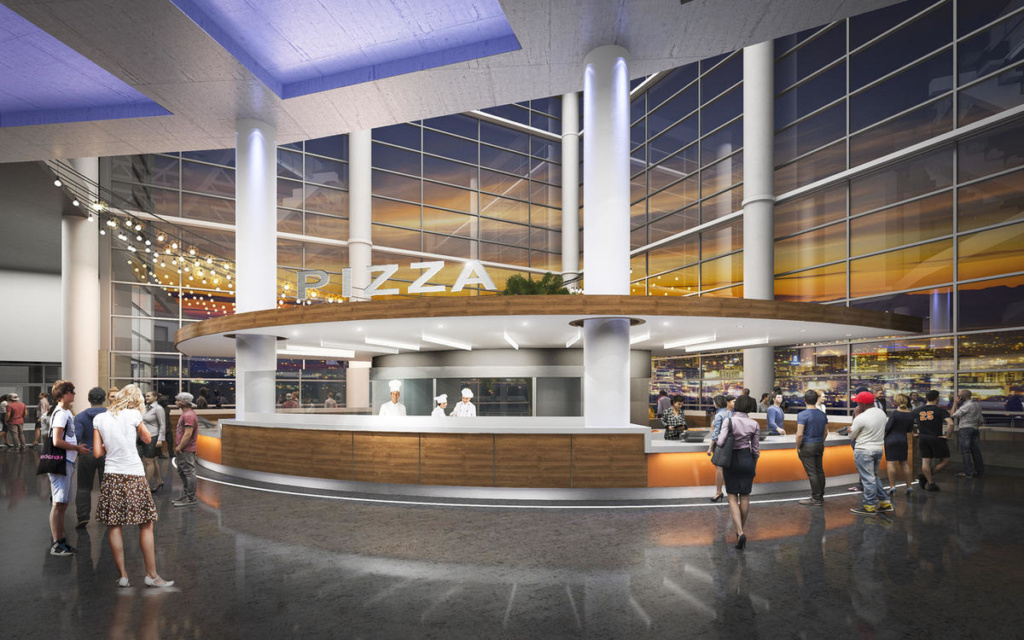 No lines for pizza from classically trained chefs. Render via Utah Jazz.

1) I would say that a solid 95% of the time we deal with people who cannot or, at the very least, are not comfortable thinking in three dimensions. These people are generally barely capable of reading a 2D drawing so when you start pulling out sheets showing the various seating levels in a ballpark/stadium you see eyes glaze over or, in worst case scenarios, insecurities come to the fore. Generally people don’t like it when you demonstrate what they consider failings in front of other people. This is where the Shock & Awe comes into play.

2) We want the client to engage with the images we’re showing them, so they need to look slick and they need to look fancy. For the most part, empty buildings are neither of those two things which is why we draw from what you so kindly described as a, “Wacky People Clip Art package.” I, personally, have about 1,200-1,500 people (referred to as “entourage,” I didn’t make up the name) I can pull from to populate my renderings and even with all that I find myself needing to create my own on a regular basis. We also have to take into account what is essentially set dressing. This means we often times have to fill shelves, kitchens, bakeries, shops, etc… with all the stuff you’d normally expect to see in these kinds of places. When we do that we’re pulling from archives of 2D and 3D greeblies (non essential items). 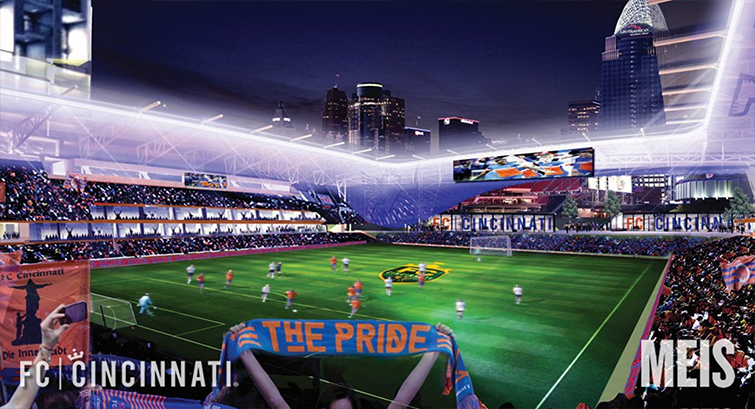 I don’t think they have enough players to run that crazy play. Render via FC Cincinnati/MEIS.

Once we’ve generated the rendering, whether it’s from Revit or 3Ds Max, we inevitably end up have to do a lot of post processing. This usually means color correction, inserting 2D entourage or greeblies, shadow correction/creation, etc… Eventually resulting in the kinds of images you see above.

Now obviously not all Arch Viz renders are as outrageous as the vaportecture movement would have you believe, it’s usually just early renders used for marketing purposes and to build buzz for a new stadium. Even the firms previously shown in this piece to create stellar renders as well. That’s why we build tools like Ultimate Skies HDRI to add those realistic touches to renders.

That said, if you’d like a few more laughs, definitely give deMause’s article a read.