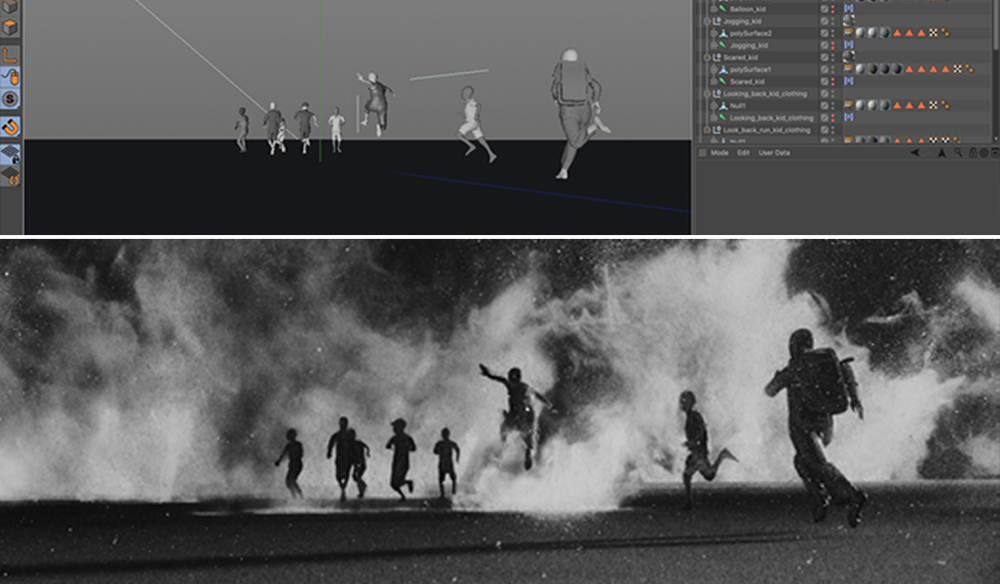 Radiohead’s Thom Yorke released his third solo album, ANIMA, last summer along with a short Netflix film directed by Paul Thomas Anderson. He followed it up late last year with the release of a haunting video for the track “Last I Heard (…He Was Circling the Drain)”.

The dreamy black-and-white video was created at New York City-based experimental studio, Art Camp. It opens on a city in chaos and intermittently follows a spacesuit-wearing character through a dystopian landscape filled with faceless crowds, enormous fires and floating cars and debris.

Directed by Art Camp & Saad Moosajee, the video was inspired by Yorke and Radiohead artist Stanley Donwood’s imaginations and contains over 3,000 hand-illustrated and textured frames made using a combination of Cinema 4D, Houdini, charcoal, dust, paint primer and cel animation.

The approach is similar to the one Moosajee and Art Camp took when creating the video for Mitski’s, “A Pearl”. Only this time, an array of artists combined additional techniques and tools, including volumetric lighting, crowd simulation, powder texturing, charcoal washing and VDB. Yorke released the video with an immersive installation during a three-day event in Los Angeles hosted by ANIMA Technologies in October.

“In some ways, the direction for this was looser than what we got for “A Pearl”, Moosajee explains. “Thom told us about some images from his dreams and about how this would relate to the world of ANIMA, which is quite dark, and “Last I Heard” was written with London in mind.” So the brief was focused on creating a video with the look of an old black-and-white film that captured the feeling of anxiety and loneliness that often goes with big cities, like London or New York.

Using some of Donwood’s Radiohead artwork, black-and-white photography and old NASA photos for reference, the team expanded on Yorke’s vision, giving each person an opportunity to contribute creatively across different mediums. Though they had only about two and a half months from start to finish, the team felt it was important to experiment and see what worked, so they switched up the process and remade the video over and over again before feeling like they got it right.

3D designer and animator Zuheng Yin worked closely with Moosajee to define the look of the video. “For a music video like this, we felt it was important to attract people from the beginning,” he explains, “Monochrome, film grain, and texture that felt human worked quite well in the context of showing Thom’s world. The visual language became more and more unique by layering our craft.”

To ensure a sense of realism and the look of an old film, the team opted to anchor much of their process in 3D. But, to make things “less perfect,” they used volumetrics and VDB in Cinema 4D, Octane and Houdini to create a layered atmosphere and light the world on fire. “I would often place lights behind animating pyro and fog containers so you would get natural flicker, diffusion and a sort of time-lapse sun effect,” Moosajee recalls. For a grainier look, the team made sure renders were never fully clean and contained noise in the images and volumes, while not being so grainy that they messed up the animation.

Though it looks like a film, nothing was practically shot for the video. Instead, the team designed and modeled the characters in C4D themselves, using motion capture to make characters’ movements look natural. Houdini based crowd simulations were populated with characters modeled in 3D by the team and outfitted using Marvelous Designer, so they would all be visually unique.

To build up the world further, the crowds were placed into custom-designed sets that were often interspersed with traffic simulations.

“Traffic is a big part of every city, and I imagined that the traffic structures inside of the ANIMA universe would follow real-world behavior, but would be just a little off,” Zuheng says. After creating a simulation with real-world behavior inside of Cinema 4D, he distorted it by pulling the road off the ground, deleting the traffic guides and silhouetting the moving cars to accentuate the negative space between vehicles and the city behind them.

To get the look they wanted for “Last I Heard (…He Was Circling the Drain)”, the team opted for a highly textural approach, using charcoal, paints, ink and powders. “We would print out 3D renders, sprinkle crushed powder over them, and brush on a mix of charcoal and water,” Moosajee explains. In certain scenes, for extra grittiness and texture, they first brushed on oil paint primer before using the charcoal wash. The effect added to the painted feel of the video, with the goal being to give every scene its own unique style based on what was happening in the shot.

From a directing and animating standpoint, Moosajee found the team’s constant reinvention of the pipeline an interesting challenge that worked because everyone was very dedicated and flexible. “One week we’d go, ‘Okay the video is going to be stylized 3D with detailed 2D’. Then the next week we’d say, ‘no the video’s going to be 3D and should feel like film photography with accents of 2D.’”

What they eventually settled on was developing specific media combinations and software pipelines on a shot-by-shot basis, so the balance was always changing in the video. “Our animators and designers enjoyed the back and forth because we were all exploring different ways to build the world together,” Moosajee recalls. “I really think you need to give your team agency to contribute to the style whenever you can because that’s when people do their best work.