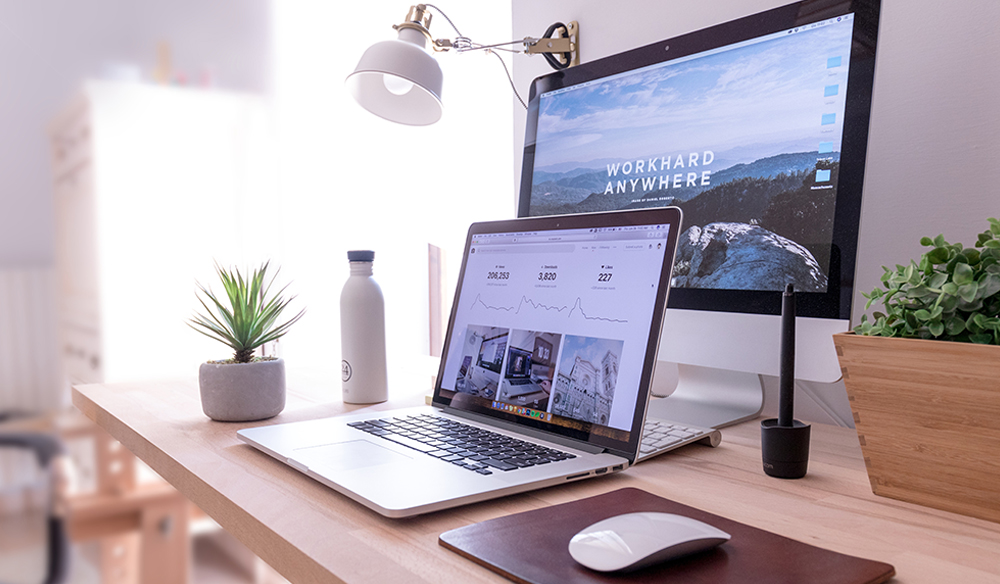 Transitioning into a freelance or remote work-from-home position? This is a guide to surviving and thriving in a home office.

Multiple times in my career, I’ve worked from home. After many mistakes over the years, I finally figured out how to get work done and still live a normal life. I put together this list of to-do’s and not to-do’s based on my experience, while debunking many of the other work from home articles I’ve read.

As someone having worked in the creative industry for over a decade, I’ve worked in every type of environment. I have worked on set, lived the cubicle life (driving a beige sedan, ugh), worked in an open-plan office, inside a theater tech booth, and now I am in my element, working remotely from home.

If you have the fortune to transfer into a full-time freelance career or remote position, there are upsides and downsides. I’m going to offer some advice and tips I’ve learned on working from home. END_OF_DOCUMENT_TOKEN_TO_BE_REPLACED

CrossProcess 2.0: Elegantly Messing Up Colors Since 2010

CrossProcess 2.0 for iOS launched over the weekend. We added some new features including a photo history that shows the last few photos taken without going out to the photo roll. Also new is the ability to post directly to twitter from within the app. You can see some of the shots I have been taking with it on my road trip over the last few days over at quickmultiball.com. Don’t use boring filters. Mess up your photos with style.

Mig asked me to render some fuzzy type for a Threadless page he was working on. Of course, I said yes. I rendered out the type in Cinema 4D using the Hair module. Then, he colored it and made it work with the design. It was hard to keep the Threadless logo readable and still fuzzy looking. But, I think it turned out pretty well. Mostly because of the great design work of from Mig.

Here are some renders and a few screen shots from the project.

See the final design on Threadless

Vintage Film For Looks is Now Only $69

Yep, if you have ever thought about ever getting my Vintage film for Looks, now is the time. It’s now only $69 down from it’s original price of $99. What’s more, you can now get ALL 17 of the guru presets from Red Giant for only $499. This includes Vintage Film For Looks and tons of other hand made presets, templates, looks, and training from industry-leading designers with decades of experience.

We are talking about really REAL designers here. Not just a nerd with a blog like me. Great artists like Harry Frank, Stu Maschwitz and Nando Costa have Packs that are included in the Guru Bundle.

What is Nick Campbell’s Vintage Film For Looks?
Red Giant asked me to create a set of looks for their Magic Bullet Looks, Quick looks and Photo looks. I have been creating different color corrected looks for photos, video and iphone apps for years, than they thought it may be a good idea to share all of those looks with you with a full set of presets that you could use in your projects. So, I did. Now, I use it all the time. Here are a few videos of it in action.

Every Filter From Vintage Film For Looks

How to Color Correct Your Footage Using Vintage Film for Looks

Recent Video I Made Using Vintage Film For Looks

Learn More About The Guru Suite

Creamyorange.com, is the oldest domain I own. It has always been home to my creative portfolio and has also been a place to learn and play with web design and coding.

In 2003 it launched with only two After Effects animations on it. I made the site with Adobe LiveMotion and featured crazy animated buttons (what a bad idea). In 2004, I learned how to chop up websites and Built my first HTML page. The wayback machine, captured most of it here. Creamyorange 3.0 was a cleaner design and was launched for my graduation and to enter the professional market. Finally, in 2008, I cut a new reel and built a PHP version of the site that was supposed to make it easier to update. While it was easier to upgrade than before, it was still a hassle. Projects were released, and shipped, but never added to my portfolio because it was too much work.

I have been meaning to move Creamyorange to a hosted platform for a while and then I saw James White’s portfolio and the search ended. I instantly signed up for Cargo and had a full site up and running in less than a day. What a fantastic service. What used to be a hassle is now super simple and even… fun!

Since I was a speaker, OFFF asked me to make a short video with the theme “Year Zero”. This is what I made. It was released as part of the OFFF 2011 packaging and promotion.

More from my marble experiments. This module was inspired by the catch and rotate machines in this huge Lego Mindstoms Marble Run.

I have been playing more with the idea of making some marble contraptions or Rube Goldberg machines in Cinema 4D. Mostly as a way to learn more about the dynamics system. Here is a concept for a way to get the marbles back up to the top of the machine. A bit bulky, but way more fun to look at than my corkscrew lift.

Made with R12 Dynamics, Ambient Occlusion and the Light Kit Pro Overhead Softbox. The depth of field effects and color correction were done with Frishluft Lens Care, After Effects, and Vintage Film for Looks.

ShakeItPhoto And Polaroid: Together At Last

I am so so so happy to announce that ShakeItPhoto now has the option to take Classic White Border Polaroid photos. Now that the days of buying 600 film are over, you can still shoot classic Polaroid Photos with ShakeItPhoto 2.0. It’s on sale now at the iTunes App Store for only 99 tiny cents. Buy now before the price goes WAY up to a whopping $1.99 next week.

Here is the video from my presentation at SXSW for the First Austin Motion Graphics Meet-up. I talk about how I got into 3D though After Effects 2.5D and talk about how to compile all of your random interests into a career in Design. It’s pretty scatter-brained, but I think I ended up at a point somewhere in there. Definitely a fun one.