The Awakening: 5-Second Projects are Back

5-second projects have returned! We are thrilled to announce the resurrection of this community favorite with The Awakening. Here are the winners.

Before we publicly announced the return of 5-second projects, we gave our members in the Greyscalegorilla slack channel the chance to kick things off. The Awakening was this past month’s theme, and we are very excited to announce the winners and showcase all the great submissions.

The key to honing any skill is practice. That’s the goal of 5-second projects. Whether you want to create an original piece for your demo reel, or you just want to learn a new toolor technique, 5-second projects are a great way to accomplish that.

By giving you a theme, and a very strict 5-second length, it’s our goal to challenge you to meet the same rules you would in any professional project – guidelines and deadlines. You can use any animation software of choice, so don’t let anything hold you back.

The winner of this 5-second project was Martin Clarke. In only five seconds, Martin managed to make us laugh out loud. You can check out more of Martin’s work on his website mographster.com.

We wanted to learn a little bit more about his process, so we reached out to Martin about his 5-second project.

Greyscalegorilla: Can you tell us a bit about yourself?

Martin Clarke: My name is Martin and I work under the name Mographster. I grew up in a place called Donegal, a nice fresh aired county in Ireland.

I studied graphic design before deciding to move into motion design a couple of year ago. I love learning C4D and After Effects and using them to move pixels around. I like to add humour into my work, and I feel it takes out my most creative side.

GSG: Tell about your process, and how you came up with this idea.

MC: I started off with a few ideas like an eye opening, but I thought more about the word awakening in terms of unconscious or being aware. With awareness, one thing that came to mind was “mindfulness.” When I practice mindfulness, I would sometimes fall asleep. This gave me a starting point and idea. I then began to write out rough scripts. One thing I wanted in the story was good humour, so I placed myself in it… naked. 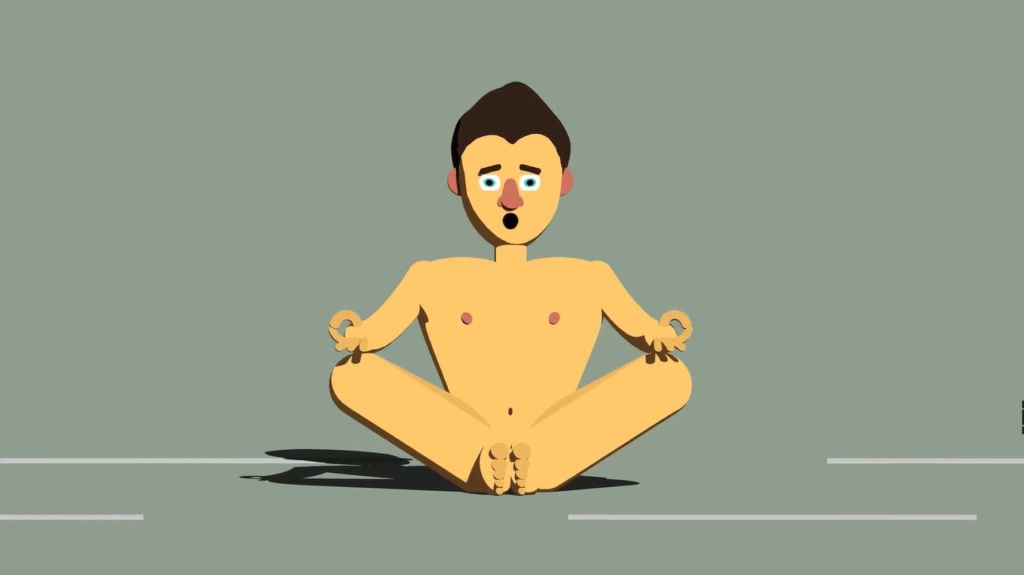 The Awakening still via Martin Clarke.

The beginning would start off with objects sitting or balancing on top of each other. Why? You see this a lot in images of meditation. The door opening was my unconscious awakening me, then the awareness of where I was. The script did change a bit as I started working on the animatic. The point was to always refer back to the theme.

GSG: How did you get started with animating this concept?

MC: The animatic was important for seeing what worked, and what didn’t work. I started drawing storyboards to see if it would be too long, or when to cut to the next scene. I had to think about camera angles and sound also. It really helps using this technique before going any further.

All the scenes, characters, and cars were built in C4D using simple primitive objects. I used the cel shader for the flat 2D style and infinite lights set to hard trace shadow. To help get the flat 2D look, I set the cameras to parallel which flattens the objects in the scene. After rendering out of C4D it was time to do a little bit of compositing and render out to Premiere Pro for the sound.

Taking second place was Ben Carmelli. Don’t worry, as Ben says, “No clocks were harmed in the making of this project.”

Ben has a really great must-read writeup on his 5-second project over on his Behance page. You’ll find some great behind-the-scenes photos and GIFs of his entire process.

The Awakening GIF via Ben Carmelli.

Check out more of Ryan’s portfolio on his website.

You can watch all of The Awakening submissions in this YouTube playlist. Be sure to subscribe to the Greyscalegorilla channel for more 5-second projects, tutorials, podcasts, and more.

Want to join the next 5-Second Project? Check out this page for the next category and all the details.