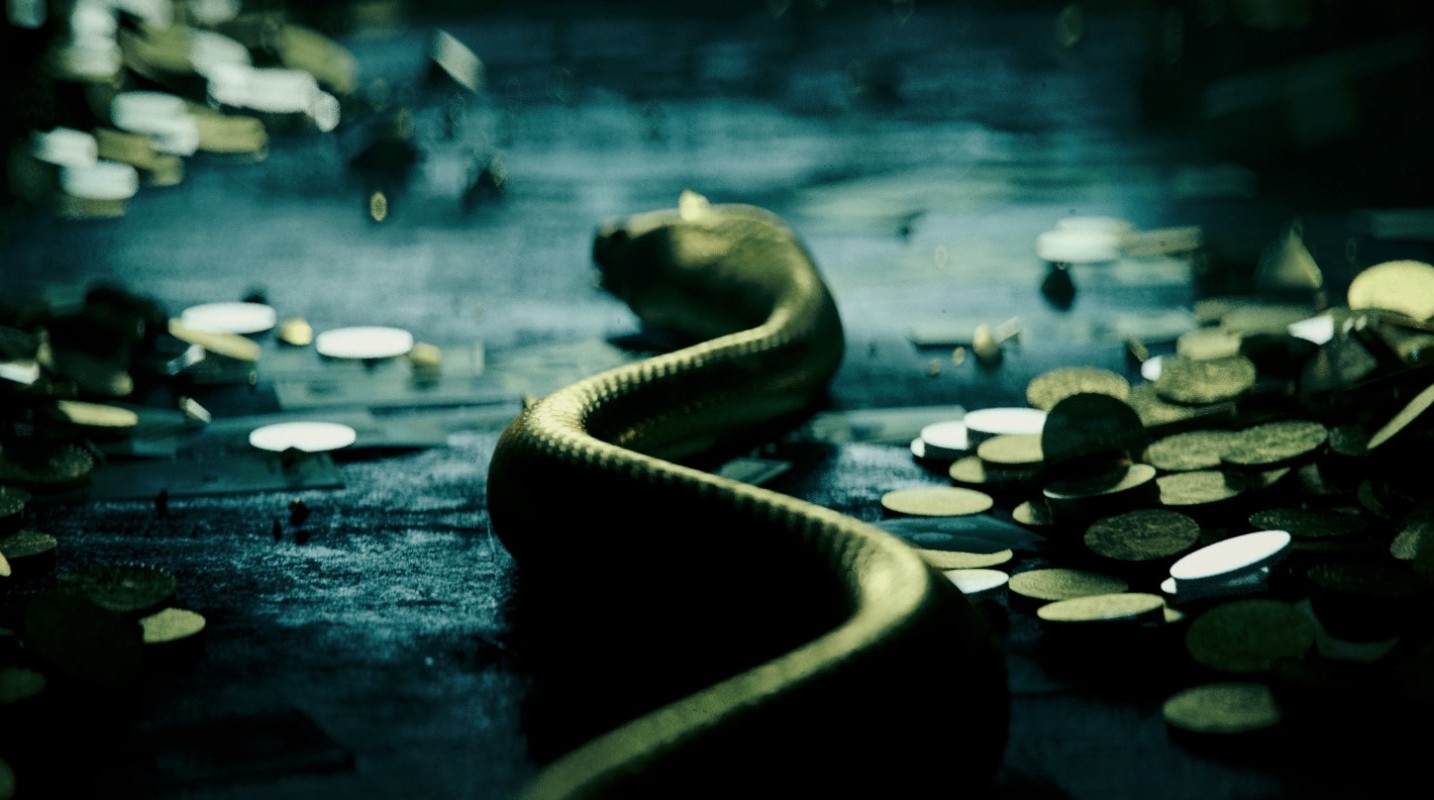 Beeple’s Short Film is a Wake-up Call for Everybody, Including Himself

Four years in the making, Beeple never thought he’d finally release ‘Manifest Destiny.’ Now you can watch it and download all the scene files he made for free.

Mike Winkelmann, a.k.a. Beeple, wrote the treatment for his latest film, Manifest Destiny, a little over four years ago, never dreaming that it would actually take so long to get the film finished.

Derailed by procrastination, he finally got back on track after making a deal with an artist he met at SIGGRAPH, him agreeing that he would finish his film in 100 days, and she would create an Everyday for 100 days. “I don’t know why I agreed to that, but it forced me to f—ing do it,” he says, admitting that “I still didn’t do anything until the last two weeks, and I seriously finished it on the 100th day.”

Reached in Denver last week where he was one of the featured speakers on Maxon’s 26-city 3D Design + Motion Tour, Winkelmann talked with me about the making of Manifest Destiny, using Cinema 4D, Octane and Houdini; losing interest in making longer films; and how his Everydays have turned darker and more political in the last year, but he remains optimistic about the future.

Meleah Maynard: Your other films, Transparent Machines and Zero Day, were social commentaries too, but Manifest Destiny feels stronger and more pointed. Would you agree?

Mike Winkelmann: Yeah, this one is not vague at all. The things I’m pointing out are literally happening now. But there is a bit of sensationalizing, like I did with the other films. There is so much inequality in the world, and it is improving in some areas, like statistics show that the number of people living in extreme poverty is slowly declining.

But things are getting worse in a lot of ways too. I tried to choose statistics that people may not have been aware of, like how Jeff Bezos made over $100 million dollars every single day in 2018, and the average Chinese worker assembling iPhones makes $1.85 per hour. I wanted to hit on a lot of different points about money.

MM: You’ve been saying this film would be done for a long time. What happened?

MW: I don’t know. I think, to be honest, I’m not actually that interested in making things that are this long anymore. I’m more interested in doing short 10- to 30-second videos. I think that you can be more experimental when you have less time, like, ‘I’ve got two days invested in this, who cares? I can do whatever.’ But when you spend four years, you’re like, ‘OMG, should I do this, or that, or this?’ It becomes paralyzing. I don’t even watch short films much anymore. If I do another video, I’m giving myself a deadline, like a month or something.

MM: Were you redoing it over and over? What was left to finish?

MW: No, the only thing left to do was edit it to the Run the Jewels track. I had everything done and rendered. But then I just didn’t touch it for a year and, honestly, it wasn’t even bugging me that I wasn’t getting it done. I was always planning on using that Run the Jewels song, “Legend Has It.” I liked the overall vibe of the song, but I hadn’t talked to them about it yet. And then one of the guys got in touch with me to say they’d seen some of my Everydays and wanted to talk about making a video. So it all worked out. 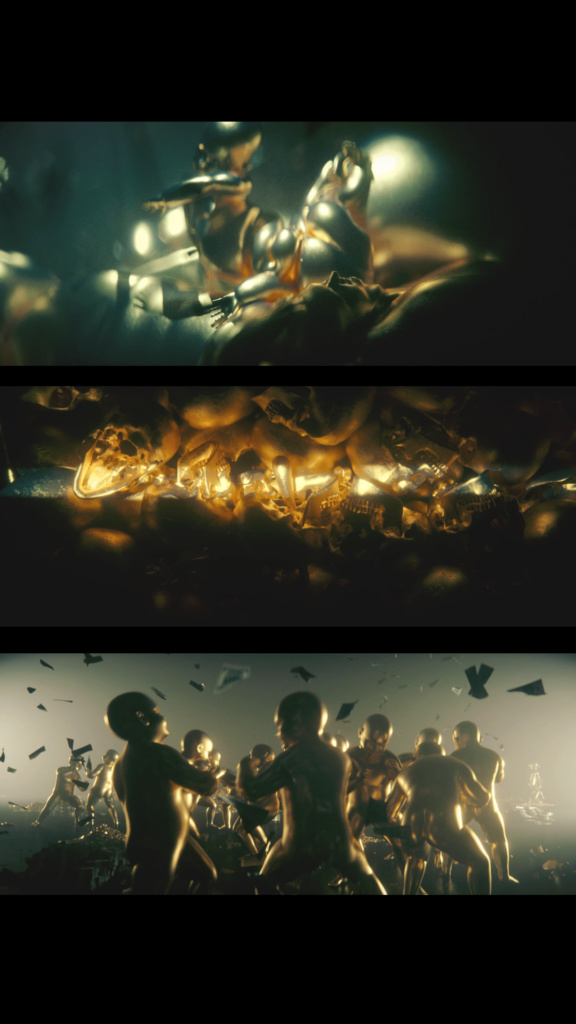 MM: Talk a little bit about your process for making this.

MW: The workflow was pretty simple, really. I mainly used Cinema 4D and Octane. Octane gave it a great look that really felt super realistic. I could just set up a couple of lights and throw some volumetrics on it to get a lot of depth and atmosphere.

The buildings were modeled in C4D, and all of the fire and destructions was simulated in Turbulence FD and rendered in Octane. There was no compositing: I just went straight out of C4D and Octane and did one color correction and that was it.

MM: What about the fat gold characters, and how they sort of melted together?

MW: Oh, yeah, I used Houdini for the melting gold people. I have no idea how I did that. When I started this four years ago, it was the first time I’d ever done characters. I used Mixamo for the big gold character, and Houdini for the melting effect. It’s a good thing I saved that as an Alembic file, or I would have had to start over since I don’t remember how I did that.

MM: Why did you go with text and music rather than narration this time?

MW: I was going to do a voiceover with music, like I usually do, and I had like 140 people submit auditions, but none of them were right. So I decided, pretty much at the last second, to put use text, even though it would be covering up all that sh-t I worked on for so long. That was probably a better choice anyway because a lot of people watch videos on mute, so they wouldn’t have heard the narration. I wanted to get a lot of stuff across, like how much debt we’re in, how rich Americans are, and how so many people are insanely poor and a few are insanely rich.

MM: Do you worry, or think about, the state of the world a lot these days?

MW: No, I wouldn’t say that. But I do work a lot more with two TVs on, one turned to FOX News and the other to CNN. I mute the sound, but it’s very interesting to see how differently they cover things. FOX is just all of this propaganda and, pretty much the opposite of what CNN says. You can see why the country is so divided.

I’m definitely interested in politics, and I do think we are headed for a time when we’re all going to have to make some changes and adjust to a new reality, including changing our levels of spending. But there are things we can do, like give money. Most of us can afford to give money, but we don’t. Or we don’t give enough. Honestly, as I’ve made more money, I’ve given less money. This film is kind of a wake-up call, for everybody, me included.

MM: It seems like you’re trying to say more with your Everydays now, too.

MW: I’d say it was about July when I started doing things that are overtly political. I like taking a political- or commerce-related scenario and abstracting it out to a ridiculous degree, like the pro-choice one where robot Trump is being forced to have a baby in the future, or where Mark Zuckerberg has no nipples because women can’t show nipples on Facebook. 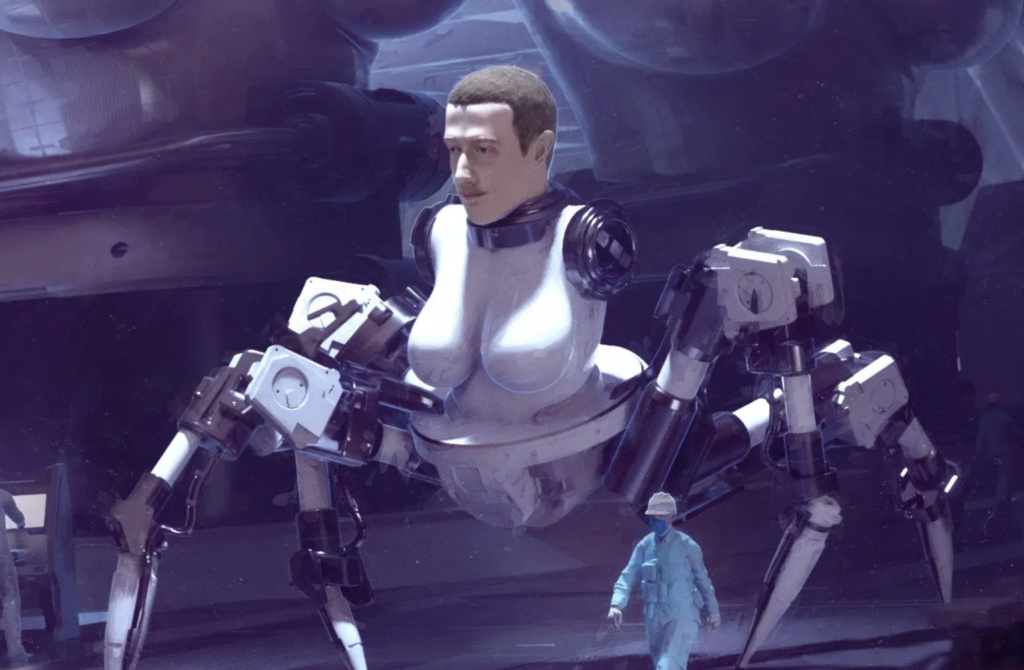 The response has been super, much bigger than anything else I’ve done. It really just felt like a natural progression from the storytelling I’ve been doing.

MM: What else are you doing these days?

MW: I’m working on a couple of things I can’t talk about yet. I just did some concert visuals for Zedd, and I’m doing a video sculpture for a festival that Amazon’s doing in December. I’m traveling a lot more. A month ago, I was in Brazil with my wife and the kids. And my wife and I are going to Russia soon for a conference I’m doing with Maxon. There’s a lot going on.