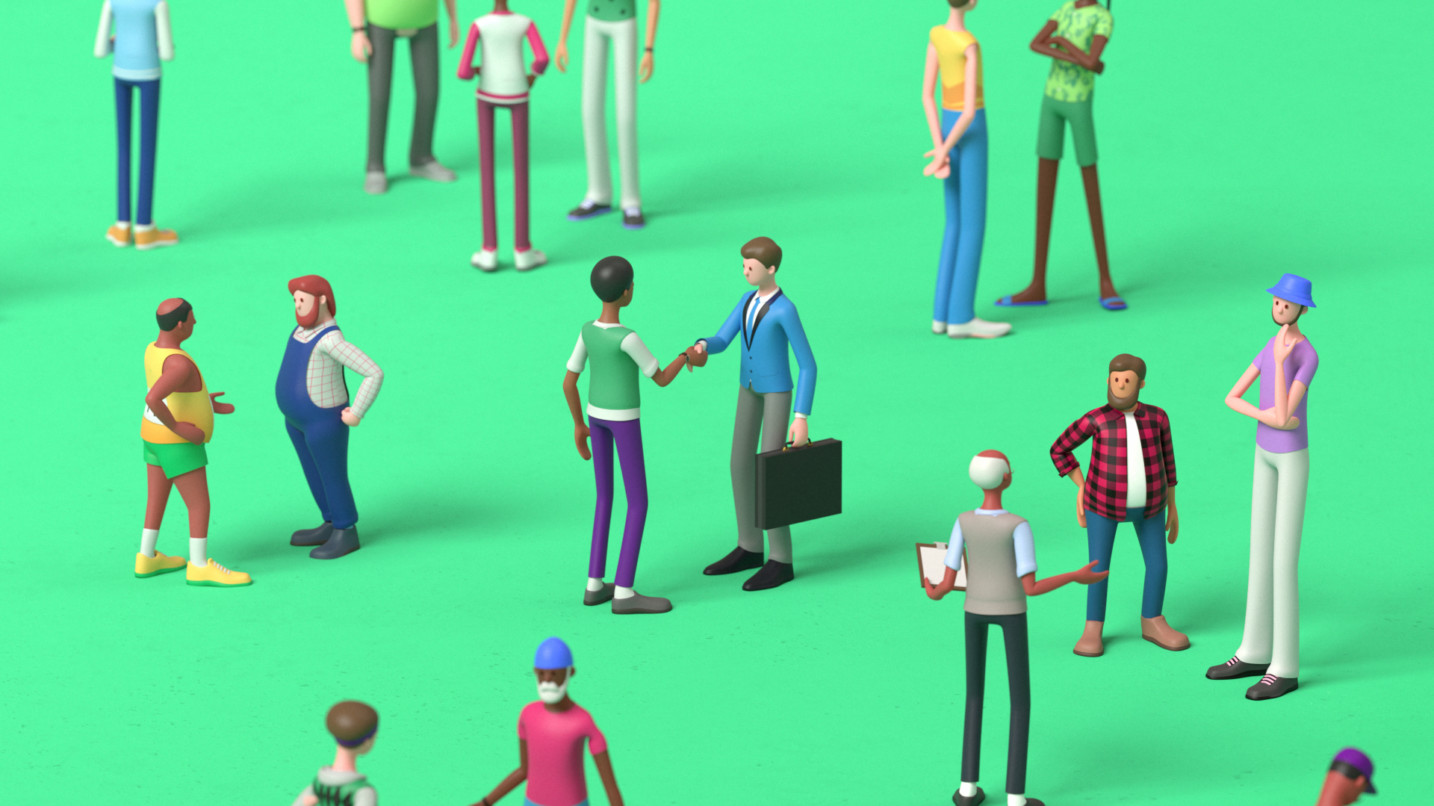 I wanted to learn more about this project, and the team behind, so I reached out to Chicago’s Run, Kick, Shout for more.

Michael Maher: Before we dive into the specifics of the project, can you tell our readers a bit about yourselves?

Erik Jensen: My name is Erik Jensen, I grew up in the burbs of Chicago. After experimenting with video and animation in high school, I spent my college years at Indiana University in Bloomington. Post-graduation in 2007, I signed up for a couple 3D specific online courses to help hone some of those skill sets while working my first full-time job. The early days of online training were a little archaic, but ultimately it helped me gain some skills for my move back to Chicago.

Nick Hopkins: My name is Nick Hopkins. Basically, my career can be attributed to making dumb little short films in high school with friends. At some point, the ideas I had at the time called for spaceships and random VFX, so I started exploring After Effects and 3D. From there I went on to Columbia College in Chicago and dual studied directing and 3D animation. I think I ultimately moved into animation because it didn’t require me to gather a crew every time I wanted to create something new. 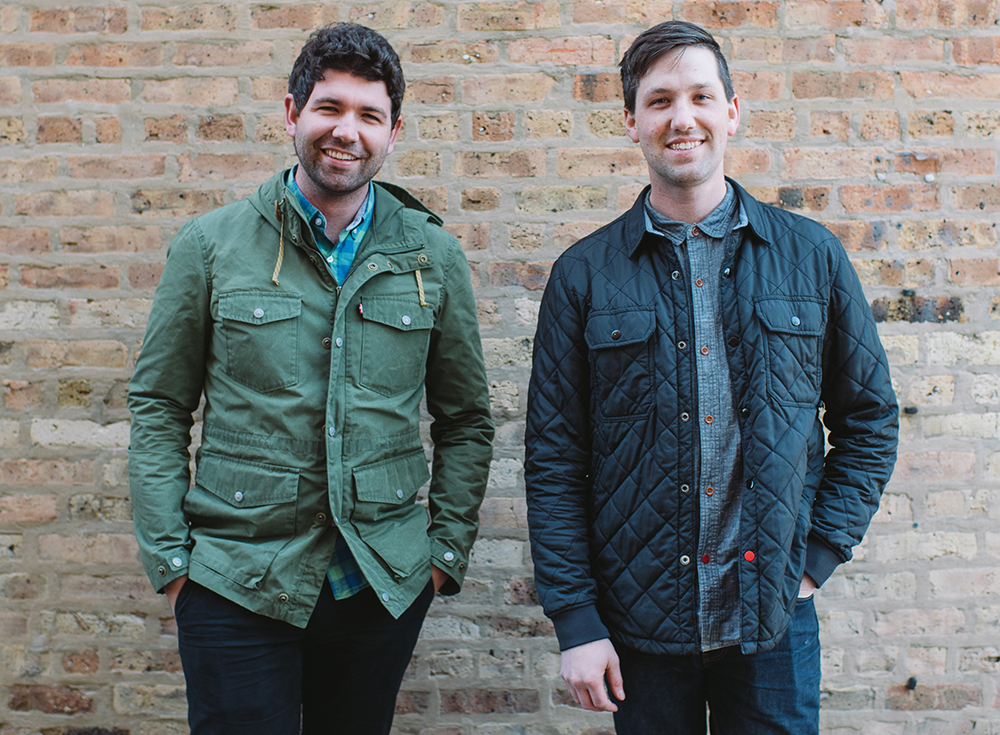 MM: So you both studied animation and production in college. You don’t often see that anymore. Where did you creative career begin?

Erik: I got a sense that I wanted to get involved with animation early on after watching movies like Jurassic Park and watching some of those behind the scenes. I went to university with the intention of getting involved in movie effects but ended up opting to go the commercial route after hearing about the state of that industry.

I came back to Chicago in 2009 during the recession and no one was hiring full-time, so I kind of went freelance by default. Following a slew of onsite gigs, I began building up some direct-to-client work and continued that path until Nick and I partnered up in 2016.

Nick: During my senior year of College I ended up getting an internship at a small Chicago studio called Protokulture. That ended up turning into a full-time job that I spent 4 years at and ultimately where I met Erik. After that gig, I spent the next 5 years or so freelancing at various studios around Chicago. 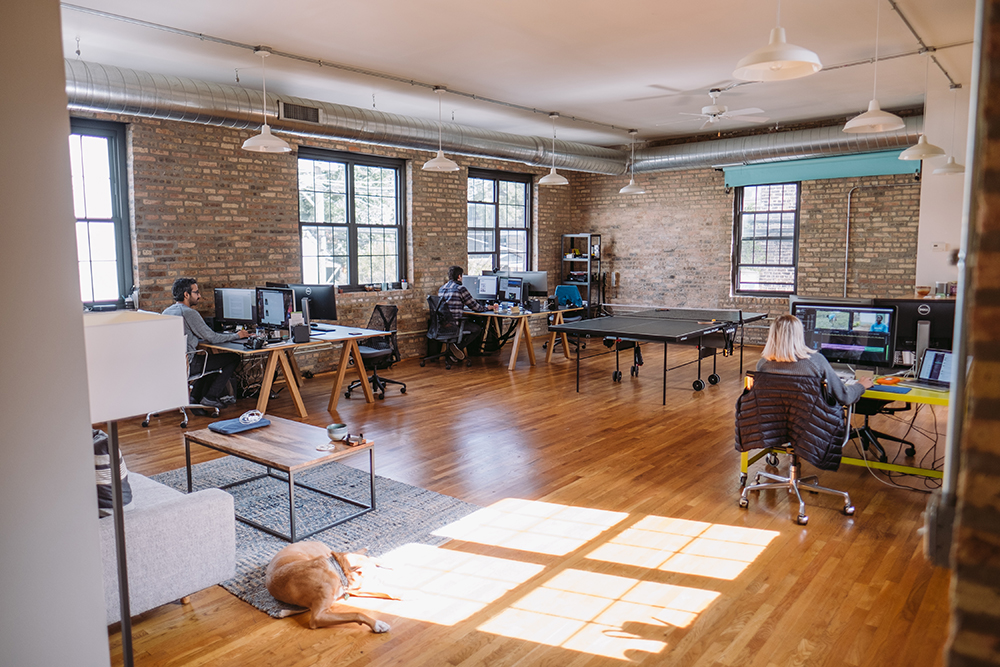 MM: What led to the creation of Run, Kick, Shout?

Erik: Nick and I began working together more frequently, hiring each other on larger projects we couldn’t do ourselves. There were a couple of really big ones where we both ended up interfacing with the client and presenting ourselves as more than just two freelancers. We ended up winning some of those jobs in between our own freelance work with great “studio names” such as Nick&Erik. After several years of this, we decided it was worth formally joining forces under Run, Kick, Shout.

MM: In terms of your workflow and pipeline, what are your tools of the trade?

Erik: The majority of our time is spent inside C4D and AE. There have been some projects that have necessitated using Fusion in order to comp at really large resolutions. We will also bust out ZBrush for the occasional sculpt. For some of the VFX work we used to have to turn to specific software for tracking shots, but the more recent releases of C4D have added some super useful and intuitive camera and object tracking features which allow us to keep our whole workflow inside one application. 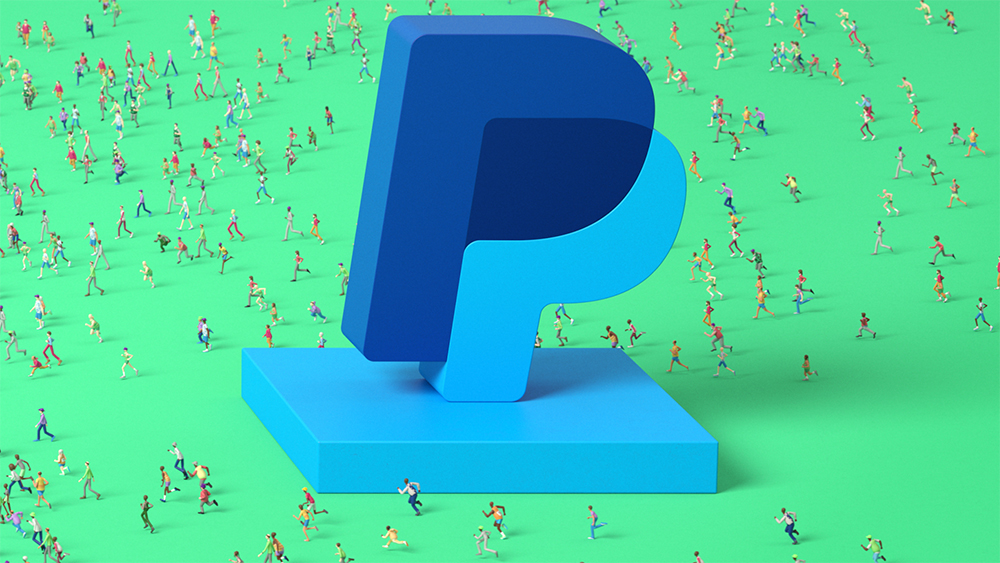 MM: Let’s talk about your most recent project. How did this PayPal project come together?

Erik: Calabash Animation approached us to team up on this campaign. It was a new agency and a new brand that neither studio had worked with before. In order to win the work and make sure that everything came together right, each studio played to their strengths. Our aesthetic and portfolio are definitely more geared to what PayPal was after, while Calabash has a strong background in character animation. So we ended up pitching a workflow and collaboration that brought the best of both worlds. 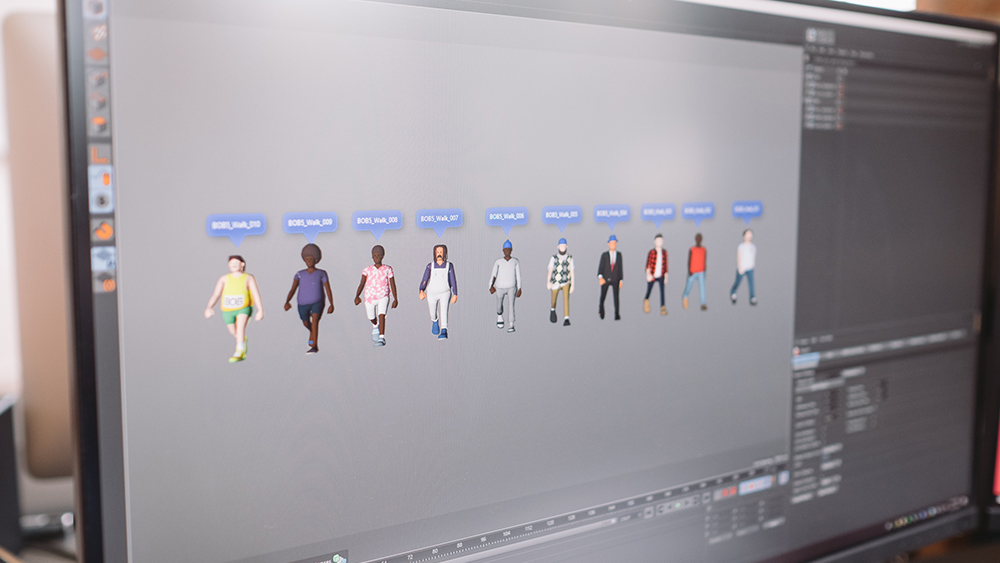 MM: What are some of the biggest challenges when it comes to working with a large brand like PayPal?

Erik: You know… PayPal was surprisingly more loose than other brands, which was great for us. We were able to mess with their logo a little bit by making it lit and integrated into our scenes. For our travel spot, we were even able to give it a glowing moonlit treatment.

The primary color for each spot was based on color palettes in their brand guide. Seeing all of those bright, loud colors definitely influenced how we treated every aspect of the lighting and rendering. 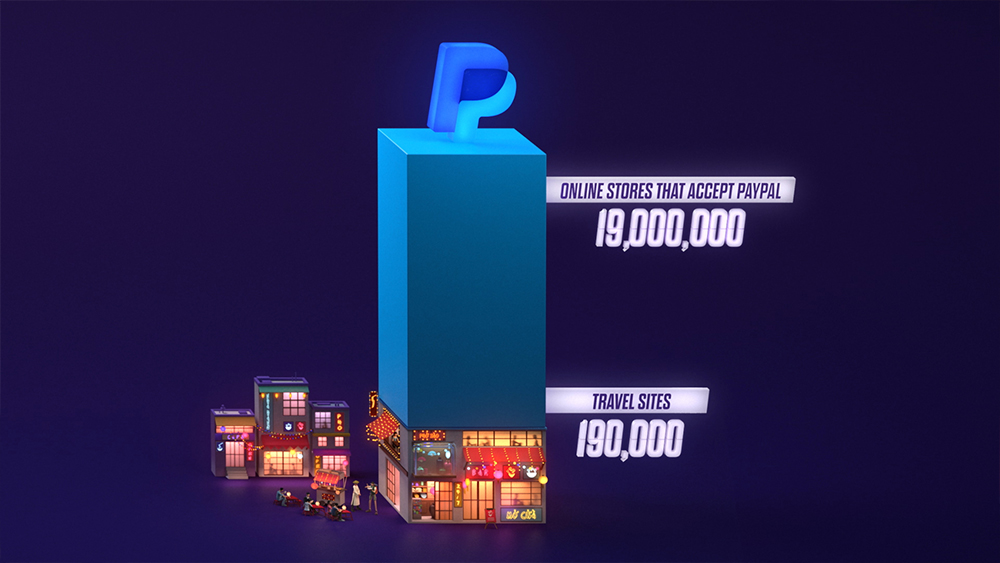 MM: How do you approach each different animation?

Erik: Since all the spots shared the same look and feel, we made sure all of our layouts were all as close to the same size and scale as possible. That meant we could start with the same camera’s, lights, etc… 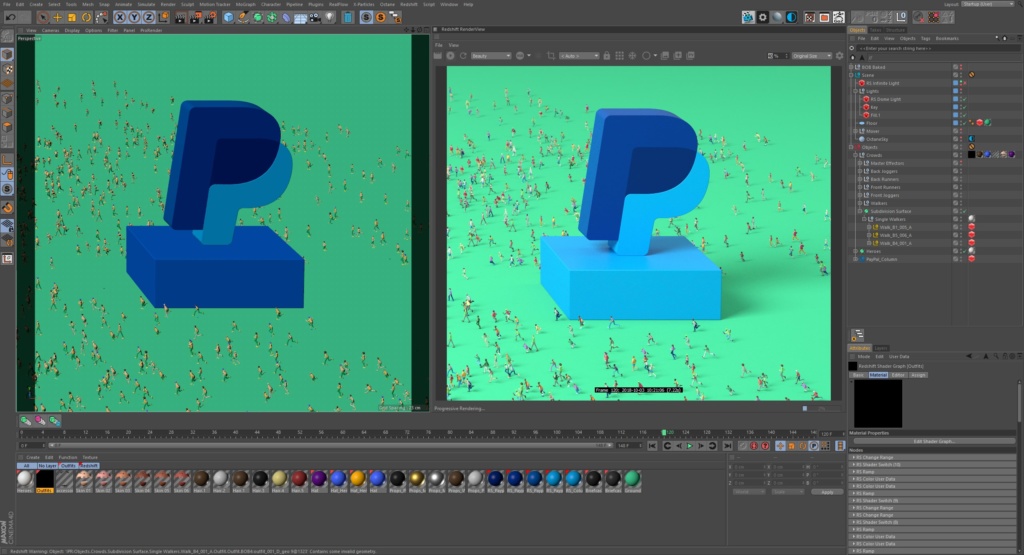 “Bobs” and “Pigeons” were the first in production and served as a test bed for the lighting and texturing approach we would end up using on all six. They also utilized a slightly different layout with two columns, which meant that the various formats had to be rethought when we dealt with the remaining four spots and their one column format.

MM: What are some of the most challenging aspects of this project?

Erik: One big challenge was efficiency. Each spot had to deliver at three different aspect ratios: 16×9, 1×1 and 9×16. We’ve noticed that most content we’re making is now meant for the web and social networks. To help keep things as streamlined as possible, we ended up rendering everything at 2500px x 2500px and then re-positioned all of it to work for each aspect ratio. That meant we could take one render out of C4D and use it for all deliverables. This saved us a huge amount of time and kept file sizes a lot more manageable. 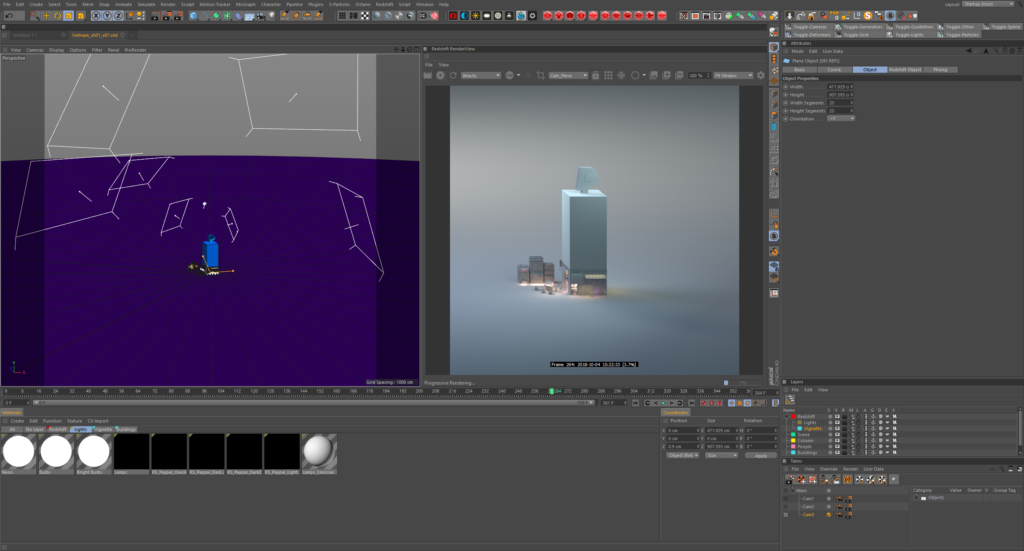 We knew off the bat two or three of these spots would be much harder than the others. C4D isn’t known for crowd sim work, so we assumed any spot that had an aspect of that would take more time. Specifically, for the spots “Bobs,” “Pigeons,” and “Gaming.” We ended up turning to the built-in tools C4D had to offer in order to accomplish it.

MM: What is your workflow in terms of designing the characters and sets to creating a final animation?

Erik: The character design and animation were handled by Calabash Animation. They did such an awesome job with the portion of things. In order to coordinate all the characters and set pieces, we primarily relied on receiving FBX or Alembic files of the baked animation. 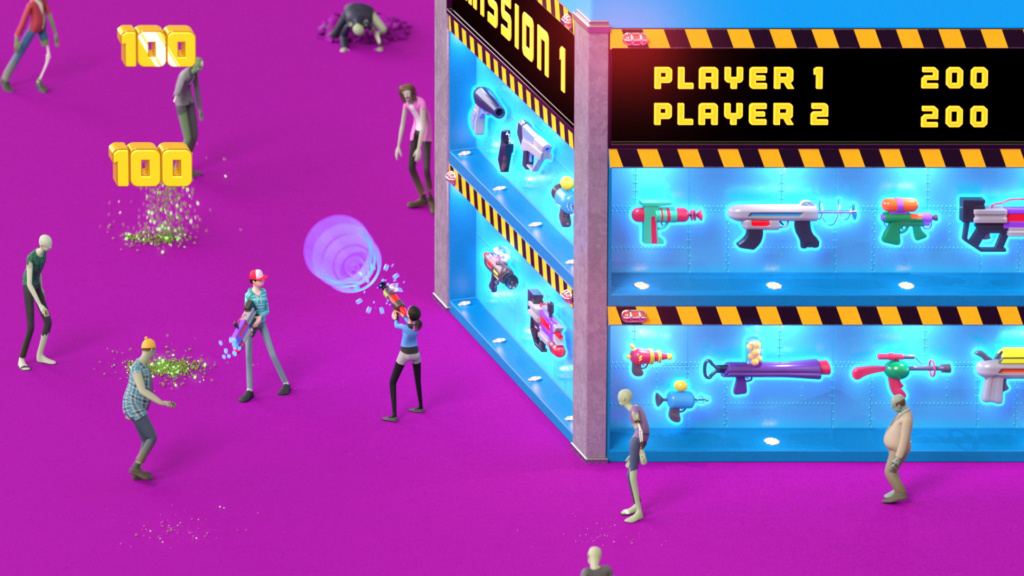 We then had a process to bake them down and assign selection tags for texturing purposes. It was important for us to work in the scene scale in order to integrate changes and updates quickly.

This was the first time we relied on Redshift in production. Despite working almost exclusively with Octane on all previous projects, we felt that Redshift could handle all the texturing work and various lighting needs better. The shader selector ended up being very instrumental in allowing us to manage hundreds of individual textures for the characters within one shader and then using the Redshift Object tags to identify which texture to pull from. 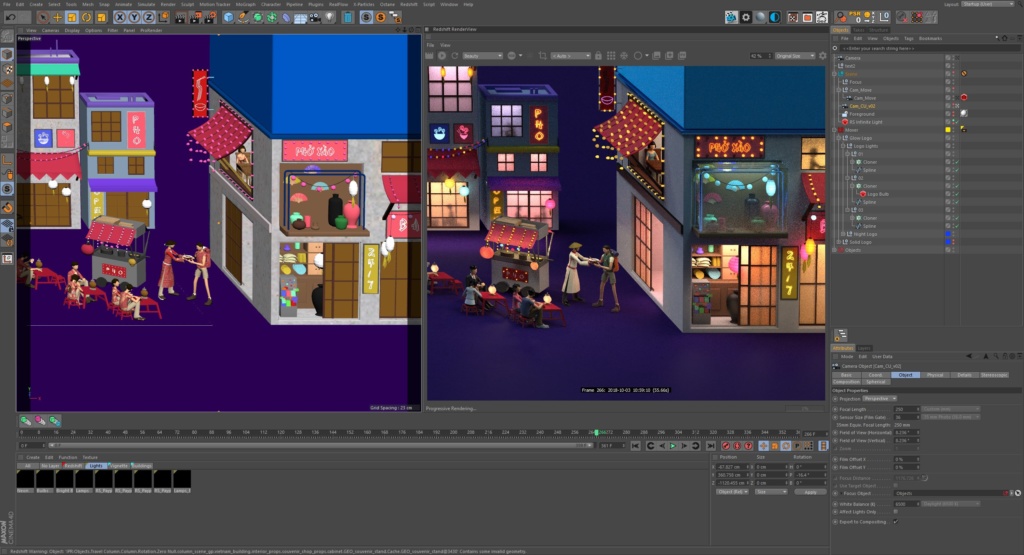 MM: Fascinating. Finally, where can our readers find out more about you and your work? 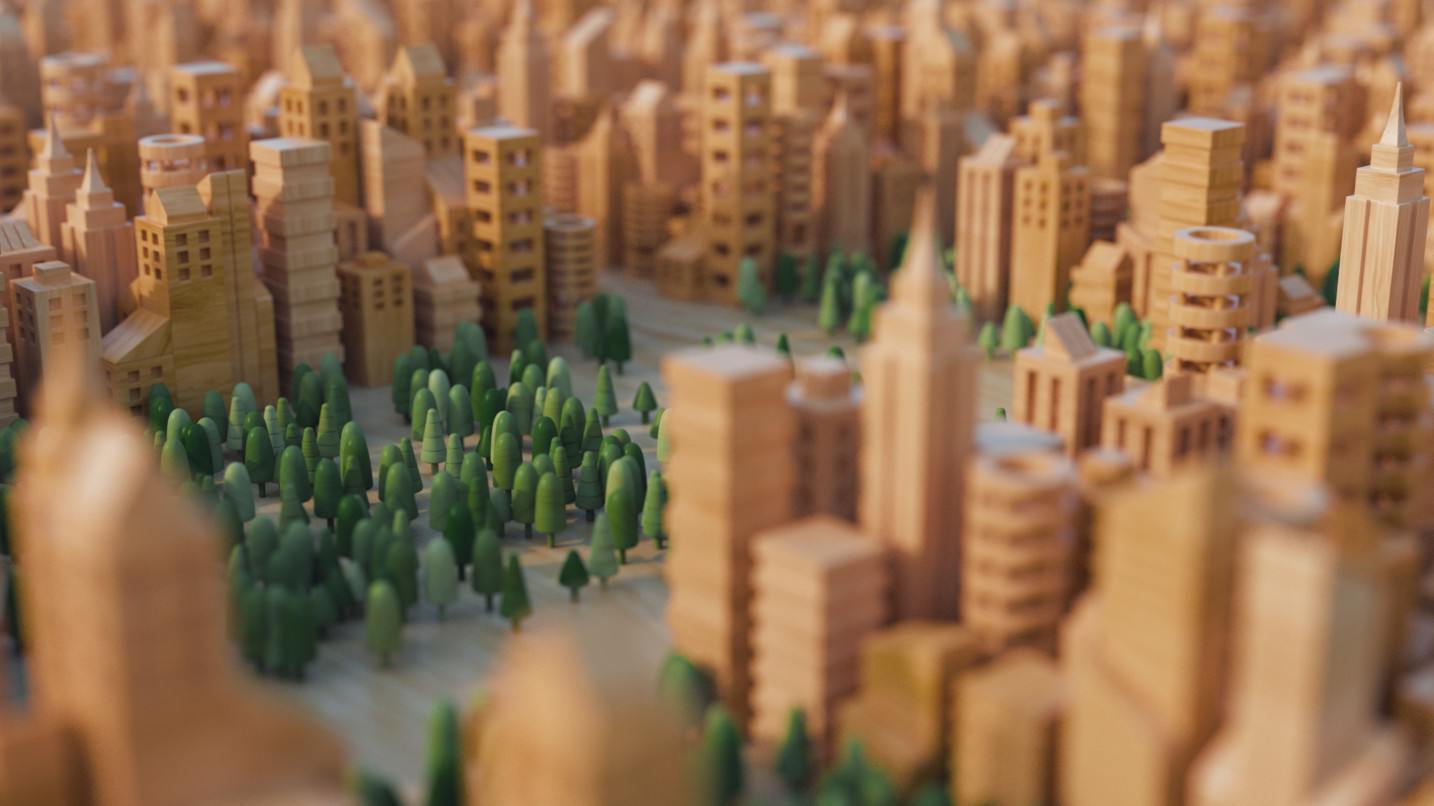 Learn C4D and Redshift from the pros